The Battle for the Future of Europe

Nick Griffin, described at various times as "the most dangerous man in British politics" and "the most successful far-right leader in British history," has been active in radical nationalist politics since he joined the National Front in 1974 at the age of 15. In 2009 he was elected as a member of the European Parliament while leader of the British National Party. Mr. Griffin is now Vice-President of the pan-European Alliance for Peace and Freedom and Political Adviser to the British Unity Party.

Jack Sen was the United Kingdom Independence Party's (UKIP) prospective Member of Parliament for West Lancashire before being unceremoniously, and quite publicly, suspended. Jack then served the British National Party as its North West spokesman in 2015, but stepped down to concentrate on his British Renaissance Policy Institute and finish his book, “How to Get Suspended from UKIP and the BNP in 10 Articles and 2 Tweets.”

Nick and Jack discuss their current political engagement and the series of films that BRPI is producing to document the work of British and American Nationalists and create a permanent public record unsullied by the warped and inaccurate accounts of the anti-European establishment and its controlled media. We sum up the main concerns being addressed by genuine Nationalists, including the Islamification of Western Europe and the overarching state of dispossession the indigenous population is experiencing. Jack and Nick explain how the White birth rate decline transpired at the same time as 2nd wave feminism, and we look deeper into the deliberately provoked, divisional force of this anti-male hysteria. We also talk about the Zionist thrust to create a multicultural mishmash out of the West, and the issue of popular alt-news outlets glossing over the relationship between immigration and the rise of terrorism and everyday violence. We touch on the turf wars going on inside the Muslim faction within Europe, and how attacks by radical terrorism networks are fueling more cause for the federalization of the European police force. Then, Nick and Jack outline the APF’s objectives and its metapolitical mission to shift the Overton window to the right.

For the members’ segment, we focus on the steps that must be taken to turn around the ailing state of England and Europe at large, which involves a bit of a debate over the viability of the current political system. Nick illustrates the sheer corruption and manipulation that surrounds the election process, and he describes his infamous Question Time lynching on the BBC that surprisingly resulted in a quadrupling of the BNP’s poll ratings. Then, we look to the possibility of a European civil war erupting and the feasibility of an armed resistance by average citizens with an aversion to firearms and, conversely, the muslim population that is infatuated by and fully loaded with advanced weaponry. Later, we discuss how Europe can rid itself of the liberal, cultural Marxist, SJW infection that has stolen the pride and identity of its people, and we consider how renewed ethnic cohesion can reinvigorate a desire for young people to have children and stand by traditional family values.

britishrenaissance.org
Alliance for Peace and Freedom
Nick Griffin interviewed by Jack Sen
@NickGriffinBU
Jack Sen on Facebook
Milo Yiannopoulos
British Renaissance Youtube
Andrew Brons - a conversation with Jack Sen
Jihad comes home to Brussels as the people pay the price for the corrupt cynicism of the political elite
The Jihadi War Against Syria and Iraq is About to Switch to Europe, by Nick Griffin
Donate Pegida-UK — Smoke, Mirrors and Zionism: The Zionist Takeover of PEGIDA-UK 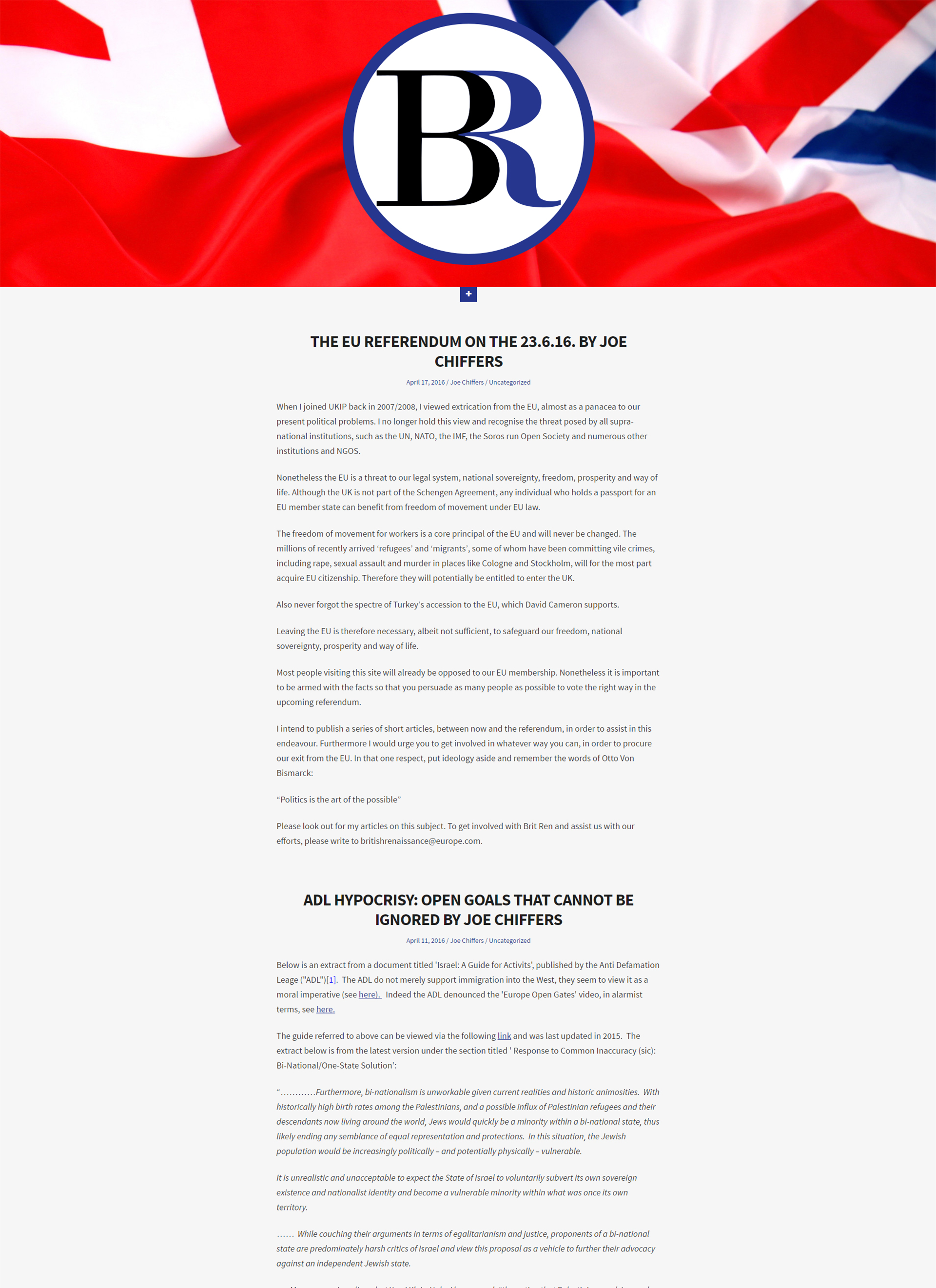