The Widening Rift Between Men and Women

Mar 16, 2015
Matt Forney is an author, journalist and entrepreneur. His writing primarily focuses on masculinity, relations between men and women, literature, and American culture. Matt is a columnist for Return of Kings and Taki's Magazine, and blogs regularly at his website MattForney.com. He also writes for Reaxxion, Alternative Right and other sites. Additionally, he is the author of the self-help guide Confessions of an Online Hustler and several other books. In this program, Forney talks about how he stumbled upon the ‘manosphere’ and became interested in the men’s rights movement (MRM). He shares his criticisms of the MRM and his views on the changing cultural attitudes that have emerged as a response to the injustices instituted by feminism in the US. We discuss feminist principles that are largely unique to the West and the mindless consumerism that has led to the degradation of the nuclear family. Further, we consider the mythical privileged – White males and the special rights granted to ‘oppressed’ groups. Matt gives an overview of some of the mainstream degenerate behaviors being normalized by the media, and the double standards of gender politics that anchor the wedge between women and men. In the second segment, Matt details the ‘sexodus’ called Men Going Their Own Way (MGTOW), a wingnut movement spawned from an unhealthy reaction to society. We look at the isolating effect of technology, the modern tribulations of our schizophrenic society, and the quest to numb the pain of existence. Later, we ponder the hive mind of leftist social justice and the slippery slope of censorship. In conclusion, we break down the anti-social nature of the younger generations and pornography’s demoralizing effects on culture. 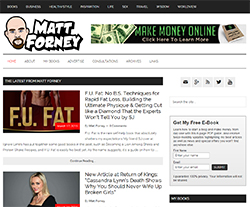