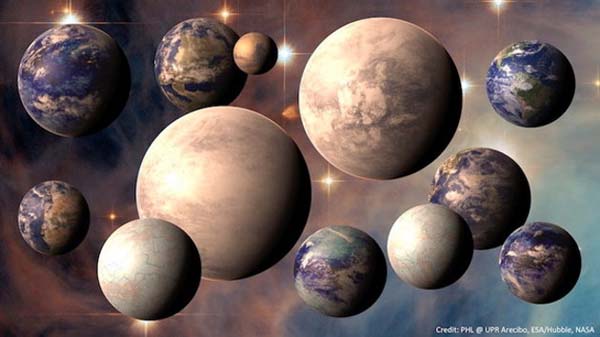 Our Milky Way galaxy is home to at least 100 billion alien planets, and possibly many more, a new study suggests.

"It’s a staggering number, if you think about it," lead author Jonathan Swift, of Caltech in Pasadena, said in a statement. "Basically there’s one of these planets per star."

Swift and his colleagues arrived at their estimate after studying a five-planet system called Kepler-32, which lies about 915 light-years from Earth. The five worlds were detected by NASA’s Kepler Space Telescope, which flags the tiny brightness dips caused when exoplanets cross their star’s face from the instrument’s perspective.

The Kepler-32 planets orbit an M dwarf, a type of star that is smaller and cooler than our sun. M dwarfs are the most common star in the Milky Way, accounting for about 75 percent of the galaxy’s 100 billion or so stars, researchers said.

Further, the five Kepler-32 worlds are similar in size to Earth and orbit quite close to their parent star, making them typical of the planets Kepler has spotted around other M dwarfs. So the Kepler-32 system should be representative of many of the galaxy’s planets, scientists said. [The Strangest Alien Planets (Gallery)]

"I usually try not to call things ’Rosetta stones,’ but this is as close to a Rosetta stone as anything I’ve seen," said co-author John Johnson, also of Caltech. "It’s like unlocking a language that we’re trying to understand — the language of planet formation."

Read the full article at: msn.com