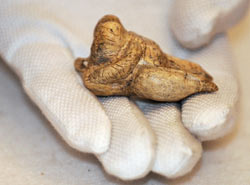 This figurine, found in 2008 in a cave in Schelklingen, southern Germany is allegedly the world's oldest reproduction of a human with an estimated age of at least 35,000 years. (AP/Daniel Maurer).

A 35,000-year-old ivory carving of a busty woman found in a German cave was unveiled Wednesday by archaeologists who believe it is the oldest known sculpture of the human form.

Carbon dating suggests it was carved at least 35,000 years ago, according to the researchers’ findings, which are being published Thursday in the scientific journal Nature.

“It’s the oldest known piece of figurative sculpture in the world,” said Jill Cook, a curator of Paleolithic and Mesolithic material at the British Museum in London. 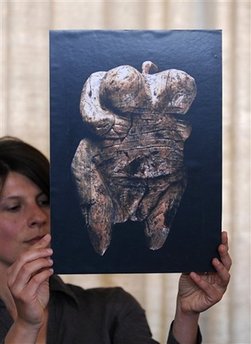 Maria Malina, scientific employee, presents the photo of a carved ivory female figurine during its presentation in Tuebingen, southern Germany, Wednesday, May 13, 2009.

Stones in Israel and Africa almost twice as old are believed to have been collected by ancient humans because they resembled people, but they were not carved independently.

The Hohle Fels cave discovery suggests the humans, who are believed to have come to Europe around 40,000 years ago, had the intelligence to create symbols and think abstractly in a way that matches the modern human, Conard said.

“It’s 100 percent certain that, by the time we get to 40,000 years ago in Swabia, we’re dealing with people just like you and me,” Conard told The Associated Press, referring to the southern German region where the sculpture was recovered along with other prehistoric artifacts.

Conard believes the 2.4-inch-tall (6-centimeter) figure may have been hung on the end of a string. The left arm is missing, but Conard said he hopes to find it by sifting through material from the cave. 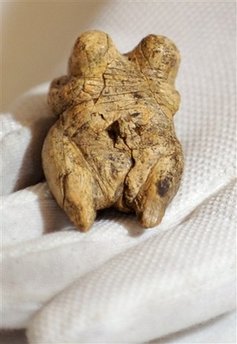 The Hohle Fels sculpture is curvaceous and has neither feet nor a head, like some of the roughly 150 so-called Venus figurines found in a range from the Pyrenees mountains to southern Russia and dating back about 25,000-29,000 years.

But Cook warned against trying to draw any connections between the Venuses and the Hohle Fels figure, saying that would be like comparing Picasso to a classical sculptor — too much time had passed.

Archaeologist Paul Mellars, of the University of Cambridge, suggested a clearer continuum.

“We now have evidence of that sort of artistic tradition of Venus figurines going back 6,000 years earlier than anybody ever guessed,” he said.

“Nothing within a million miles of this has ever been found in a Neanderthal layer,” Mellars said.

The archaeologists agreed the sculpture’s age and features invite speculation about its purpose and the preoccupations of the culture that produced it.

Cook suggested it could be symbol of fertility, perhaps even portrayed in the act of giving birth.

Mellars suggested a more basic motivation for the carving: “These people were obsessed with sex.”

Conard said the differing opinions reinforced the connection between the ancient artist and modern viewer.

“How we interpret it tells us just as much about ourselves as about people 40,000 years ago,” he said.