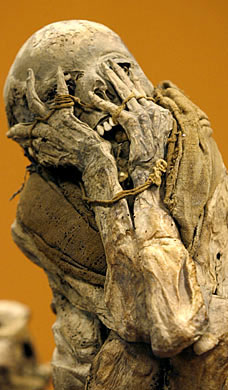 Hands over her eyes and her face gripped with terror, the woman's fear of death is all too obvious.

The remarkable mummy was found in a hidden burial vault in the Amazon.

It is at least 600 years old and has survived thanks to the embalming skills of her tribe, the Chachapoyas or cloud warriors.

Eleven further mummies were recovered from the massive cave complex 82ft down.

The vault - which was also used for worship - was chanced upon three months ago by a farmer working at the edge of northern Peru's rainforest. He tipped off scientists who uncovered ceramics, textiles and wall paintings.

The Chachapoyas were a tall, fairhaired, light-skinned race that some researchers believe may have come from Europe.

Little is known about them except that they were one of the more advanced ancient civilisations in the area. Adept at fighting, they commanded a large kingdom from the year 800 to 1500 that stretched across the Andes.

It is not known what the Chachapoyas actually called themselves - they are identified by the name given to them by their rivals and eventual conquerors, the Incas.

It comes from the Inca's Quechua language and means 'cloud people', because of the high forests in the clouds that the Chachapoyas inhabited.

Virtually all record of the tribe was lost when the Incas were themselves overrun by the Spanish conquistadors who landed in 1512.

They have, however, left behind a spectacular citadel, called Kuelap, 10,000ft up in the Andes.

It has more than 400 buildings and defensive towers, many of them with decorated walls, cornices and friezes.

Some experts rate Kuelap more highly than the Incan ruins at Machu Picchu.

Herman Crobera, the leader of the archaeological team that explored the cave, said: 'This is a discovery of transcendental importance.

'It is the first time any kind of underground burial site this size has been found belonging to Chachapoyas or other cultures in the region.'

He said walls near the mummies in the limestone cave were covered with paintings of faces and warriorlike figures which may have been drawn to ward off intruders and evil spirits.

'The remote site for this cemetery tells us that the Chachapoyas had enormous respect for their ancestors because they hid them away for protection,' added Mr Crobera.

'Locals call the cave Iyacyecuj, or enchanted water, because of its spiritual importance and its underground rivers.' The archaeologists have not yet established an accurate age for their finds.

Once they have finished exploring and excavating the tomb, Peruvian authorities want to turn it into a museum. The mummies are going on show at the Museum of the Nation in the capital Lima.