7/7 passenger sat right next to ’bomb’, left nearly unscathed: A wonder, or whitewash?

Dec 6, 2010 Source: terroronthetube.co.uk
Right next to the ‘bomb’: Shehzad Tanweer and William Walshe

Irishman William Walshe was sitting right next to where Tanweer supposedly detonated the bomb, but oddly enough the Inquest has not asked for his testimony.

Shehzad Tanweer had his rucksack on the floor, standing in the Aldgate tube train, the Inquest heard, by the corner of the second set of double doors though no-one saw him there. He then blew up into about fifty pieces – supposedly DNA-checked! So, how did William Walshe fare, sitting in the seat right next to where the ‘bomb’ went off?

A couple of days later, Mr Walshe gave an interview to a TV company about his experience, still very much in one piece though scarred and burnt. He had climbed out of the blasted coach through the window behind him, and his legs had been cut by the glass.

The Inquest has spent three weeks hearing gruelling stories from survivors of the Aldgate blast, but it does not wish to hear from the man who was allegedly sitting right next to the ‘suicide bomber?’ It has heard no less than 74 witnesses over the Aldgate blast, plus 42 statements read out from persons who could not attend, over a period from 18th October to 4th November. That’s over a hundred testimonies! There were only thirty people in the carriage, so the witnesses for the Inquest comprise over thrice the number of persons in the carriage! Why was William Walshe omitted from that list?

His testimony would have annihilated the credibility of the government’s story, with Tanweer standing (for no reason) right next to a rucksack that he knew was going to blow up, and ending up in dozens of tiny pieces plastered around the coach – while a man sitting closer to the bomb than ‘Tanweer’ survived in one piece and climbed out of the window!

Using the Met’s helpful diagram, where Mr Walsh is person No.3 and Tanweer No. 5, we see the blast epicentre as more on the other side of the first set of double-doors, away from him. 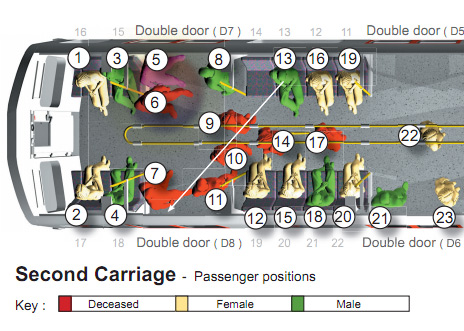 Click for full diagram -[RIC Ed Note: Interesting! Why did #8, Greg Shannon, not die as well? There seems to be no record of his injuries and he has apparently not been called to give evidence at the inquest.]

Walsh’s brother told an Irish newspaper (see below) a week after the event:

There was … about a row of 10 people between Willie and the primary explosion. The emergency services explained afterwards that it was because there were so many people in front of him, their bodies protected him, that Willie’s injuries were not as serious.

Evidently, there was a person right in front of him who was killed, and that shielded him from the main blast.

But, that cannot square with where the Met are trying to put Tanweer. We begin to appreciate why the authorities have put off this inquest for five years – the ghastly incompatibility of any story they are able to brew up, with the plain facts of experience.

The Inquest heard that seven dead bodies were definitely counted after the Aldgate blast, before any identification of who was who (Nov.3rd pm, paras 5-8). But, the Met’s diagram had eight such bodies, because they needed to add in one more, the ‘terrorist!’ The Inquest coped with this problem, by having the expert testimony of Dr Morgan Costello followed immediately by a report on DNA analysis, allegedly showing how ‘Tanweer’ turned up in 52 different samples from that exploded coach – no wonder Dr Costello had failed to number him amongst the dead, after his remains had splattered all over the place!

Its wrong that families of the alleged bombers have not been permitted to attend the Inquest. Tanweer’s family ought to be there, if a statement about his death is being made. Would they agree that the remains of Tanweer were thus in small pieces? At his burial on 25th October 2005 there were some reports of an intact body: the usually reliable ‘Official Confusion‘ site found that ‘the bodies were apparently returned relatively intact.’ (in ‘DNA and documents’), discussed here.

Are funny number-games being played – with 52 dead on July 7th, a total announced by Australia’s Prime minister John Howard, on July 8th, rather too early for such a total to have been reached? The Inquest heard how the three synchronous tube bombs went off over an interval of 52 seconds - as barrister Hugo Keith explained:

The times I have referred to are the actual times extracted from the power system computerised event logs: “In summary, the times recorded by the power control room are 08.49 in respect of Aldgate East, 08.49.43 in respect of Edgware Road and 08.49.52 in respect of King’s Cross/Russell Square.” (Oct 18 am, 8: 5-14)

(The first blast was exactly timed by the Inquest as having been at 8.49.00 am.) And now we hear that 52 different samples of tissue checked ‘terrorist’ by DNA on the Aldgate train! 52 is the number of a pack of cards, 13 x 4. Is some funny card-trick being played on us? These number-games do not increase our confidence in the alleged Tanweer DNA samples. Common-sense surely tells us, Shehzad Tanweer was not on that train.

The above quote was from the Connacht Tribune, a local Galway paper, with an on-line presence at http://www.galwaynews.ie/, on 15 July 2005, here - 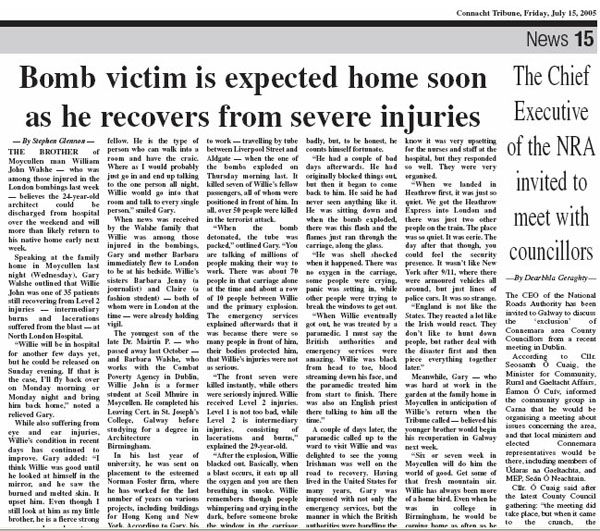 Book: Terror On The Tube: Behind the Veil of 7/7, An Investigation (By Nick Kollerstrom, Introduction by Kevin Barrett)