A Minnesota Mystery: The Kensington Runestone 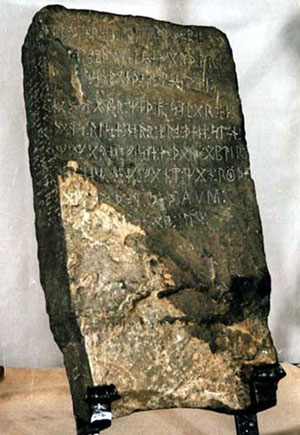 It's one of Minnesota's greatest mysteries. It's something that puts settlers in America well before Columbus. A Minnesota geologist thinks the controversial Kensington Runestone is the real thing and there is evidence that he says backs up the theory.

The Kensington Runestone is a rock found near Alexandria a century ago. It's inscription speaking of Norwegians here in 1362. It begs the question. Were Vikings exploring our land more than 100 years before Columbus? Or is it just an elaborate hoax?

New research shows that the stone is genuine and there's hidden code that may prove it. It contains carved words that have haunted these hills and the Ohman family for more than 100 years, yet their faith has never wavered.

"I just never had any doubt. I mean I was very emphatic about it. Absolutely it's real. There's no doubt," said Darwin Ohman. His grandfather found the Runestone.

Darwin's grandfather Olof Ohman has been considered the author of Minnesota's most famous fraud, the Runestone. He says he found it buried under a tree in 1898. Critics say the language on the stone is too modern to be from 1362, that some of the runes are made up. They say this simple farmer carved it himself to fool the learned.

"You're calling him a liar. If this is a hoax he lied to his two sons, he lied to his family, lied to his neighbors and friends and lied to the world," said Scott Wolter a geologist and researcher of the Runestone.

Wolter and Texas engineer Dick Nielsen are sharing for the first time new evidence about the hidden secrets they say are carved in this stone.

"It changes history in a big way," Wolter said

In 2000 he performed one of the very few geological studies on the stone. He says the breakdown of minerals in the inscription shows the carving is at least 200 years old, older than Olof Ohman. Those findings support the first geological study in 1910 that also found the stone to be genuine.

"In my mind the geology settled it once and for all," he said.

Linguistic experts are not convinced. They say runes like those on the stone are made up. But Nielsen has now found the same one here in an old Swedish rune document dating back to the 1300's.

"It makes me ask the question if they were wrong about that what else were they wrong about?" Wolter said.

For the first time Wolter has documented every individual rune on the stone with a microscope. He started finding things that he didn't expect. He was the first to discover dots inside four R shaped runes on the stone. He said they are intentional and they mean something. So Wolter and Nielsen scoured rune catalogs.

"We found the dotted R's. It's an extremely rare rune that only appeared during medieval times. This absolutely fingerprints it to the 14th century. This is linguistic proof. This is medieval, period," Wolter said.

They traced the dotted 'R' to rune covered graves inside ancient churches on the island of Gotland off the coast of Sweden. What they found on the grave slabs were very interesting crosses. They were Templar crosses, the symbol of a religious order of knights formed during the crusades and persecuted by the Catholic Church in the 1300's.

He has uncovered new evidence that has taken his research in a very different direction. Wolter now believes that the words on the stone may not be the record of the death of 10 men but instead, a secret code concealing the true purpose of the rune stone.

Two runes in the form of an L and a U are two more reasons why linguists say Olof Ohman carved the stone. They are crossed and linguists say they should not be. 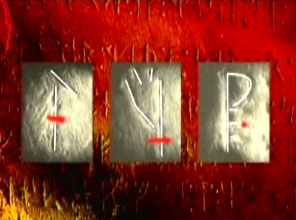 A third rune has a punch at the end of one line. Each rune on the stone has a numerical value. Wolter and Nielsen took the three marked runes and plotted them on a medieval dating system called the Easter Table.

"When we plotted these three things we got a year, 1362. It was like 'oh my god is this an accident? Is this a coincidence?' I don't think so," Wolter said.

They wondered why Templars would come to North America, carve the stone and code the date.

"If it's the Templars that were under religious persecution at the time, that would be a pretty good reason to come over here," Wolter figured.

"I'm sure a lot of people are going to roll their eyes and say oh it's the Davinci Code and if they do they do. This is the evidence. This is who was there. This is what the grave slabs tell us. It is what it is," he said.

Wolter and Nielsen's authored the book "The Kensington Runestone: Compelling New Evidence." Wolter is currently writing another book on the Runestone.