ADL claims 26% of all world population is “anti-semitic” 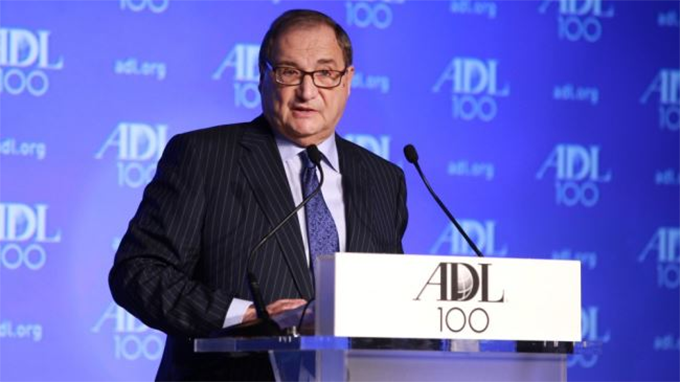 The Jewish ADL (Anti-Defamation League) revealed this week that more than ‘one in four adults’ are ‘anti-Semitic.’

Of some 53,100 adults in 102 countries and territories around the world surveyed for the ADL Global 100: An Index of Anti-Semitism, 26% were found to be ‘deeply infected’ with ‘anti-Semitic attitudes’.

Personally, I find both the ADL and its polls quite amusing. Can you think of another people on this planet who would spend so much time and energy measuring how much they are loved or hated? Do the Brits measure how despised they are in Moldova? Do the Palestinians question people all over the world to see how much they love those indigenous people of Palestine? Well, the Jews do and it’s for a reason. Abe Foxman, ADL’s National Director, must by now have grasped the immense destructive global power of Jewish politics, so naturally he wants to measure the reaction. But rather than reflecting on the results and then turning to his own people in the hope of re-educating them, Foxman always blames the rest of humanity. And why? Because in the Judeo-centric cosmos, the Jew is always innocent and the Goy is always to blame.

ADL discovered that the least anti-Semitic country at 0.2% of the adult population ‘hating Jews’ is ……..Laos! But what does that mean? Should the ADL start to schlep Jews to Laos? Maybe, rather than Palestine, it is Laos that is the promised land. Trouble is, once the Jews start to immigrate to Laos, anti Semitic attitudes will sharply rise. ADL is yet to resolve this Jewish dilemma.

Apparently, according to the ADL, the territories of the West Bank and Gaza Strip had the highest ‘anti-Semitic’ attitudes at 93%. But is it really ‘anti Semitic’ to oppose those who plundered your home and murdered your family? No Abe, this is not anti-Semitism, this is resistance.

The questions of the survey were also very interesting. Respondents were asked a series of 11 questions about Jews, Jewish power, Jewish tribalism, Jews and money and Jewish behavior. Those who responded affirmatively to six or more negative statements about Jews were considered to hold ‘anti-Semitic’ attitudes. But I beg to differ. I’d think that those who answered affirmatively were simply authentic, honest folk who were better informed about the state of the world. Now, if I am correct here, it means that about a quarter of world’s population is authentic, honest and informed – a most positive and encouraging bit of information.

All in all, it seems that AIPAC, the Jewish State, CFI, CRIF, ADL and Bernard Henri Levy have been investing an awful lot of energy giving Jews bad name.

Gilad Atzmon is an Israeli-born British jazz saxophonist, novelist, political activist and writer. Atzmon’s album Exile was BBC jazz album of the year in 2003. Also, being a prolific writer, Atzmon’s essays are widely published. His novels Guide to the perplexed and My One And Only Love have been translated into 24 languages. Gilad’s latest book, The Wandering Who? is a study of Jewish Identity politics. More articles by Gilad Atzmon

Further material for you to contermplate:

"You have to really change the policy of immigration inside Europe. This is very important, you have to adopt the educational system and adapt all the self understanding of the states. They are not anymore only white or only Swedish or only Portuguese or only German. They are multicultural places in the world."

Why is this "very important" Anetta Kahane?

There also seem to be a particular obsession with the idea of deconstructing the nation state of Sweden, have you been paying attention to this fact? Sweden is constantly brought up when discussion takes place in this context. Why? She’s the same as Barbara Spectre... who sits in Sweden, with state funding, doing her "good work" to destroy Sweden and Europe from within.

Slavery Of White Women In Israel

More than 4000 Slavic girls, throughout the former Eastern Bloc, are smuggled into Israel as sex slaves, every given year. In most cases they’re either kidnapped straight off the streets by the "Russian" Jewish mafia, or lured under the false pretense of having an improved standard of living if they’re willing to travel and work over there, only to find that their new employer is in fact a human trafficker before it’s too late to reconsider. This of course proves no obstacle to these types of Jews who are fully aware of their desperation in escaping their impoverished community’s, manipulate them into believing that all It takes for their dream move to become a reality, is to be willing in a cushy job in some exotic location.

After arriving In Israel they are immediately sent to an auction house, put on an auction block and then sold to the highest bidder. Typically sold at a price ranging from $8,000- $15,000. Only until they pay off their "debt" they’re subjected to all kinds of harsh treatments: beaten, Drugged, tortured, gang-raped (Jewish method "of breaking them in"), degradation and dehumanization of being stripped naked in public and put on display in front of a bunch of men. All the while there forced to service 15-20 Jewish and Arabic clients, up to 20 hours a day, 7 days a week.

Typically after a year or so of going through such hardship, the poor soul is throw onto the streets and left to rot, after the pimp deems her to be physically and mentally of no use.

In Tel Aviv alone there over 300 brothels, which 90% of the prostitutes residing in them are of Slavic origin.

Some quotes of Jewish pimps:

"What particularly offends Ben-Ami is the haredin (orthodox Jews) who crowd the Tel Aviv brothels on Friday mornings and afternoons for a pre-Shabbat tumble." "Because these women are not human beings," Greunpeter-Gold said indignantly. "They are foreign women. The religious prefer it to be with foreign women because then they don’t wrong Jewish women."

’I own you,’ she recalled his saying. ’You are my property and you will work until you earn your way out. Don’t try to leave. You have no papers and you don’t speak Hebrew. You will be arrested and deported. Then we will get you and bring you back.

Don’t miss our radio interviews with Gilad Atzmon and others on these topics.

Gilad Atzmon - The Wandering Who? Moral Interventionism & The Decline of the West