African "Asylum Seekers" Arrested For Stabbing In Ikea In Sweden 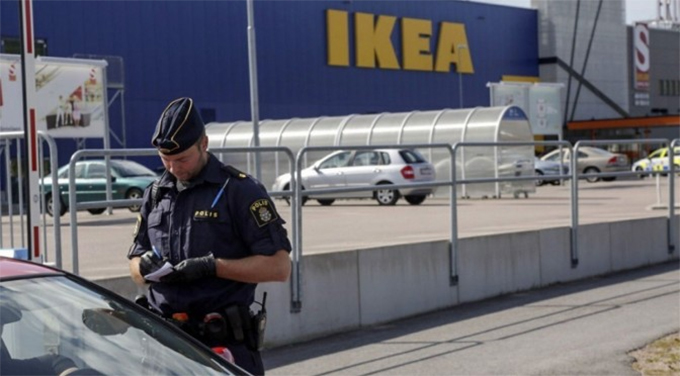 Sweden is important because it represents the logical conclusion of anti-Western and anti-White multiculturalism. For all intents and purposes, self-government has been abolished in order to ensure mass immigration continues, regardless of what people think about it. The entire country resembles nothing so much as one giant left wing college campus.

And yet, multiculturalism doesn’t even work there. And now we have an example of Immigrant Mass Murder Syndrome in what was once considered a model Nordic country.

Ikea stores are famous for their faux domesticity. They are like giant dollhouses full of sleekly designed Swedish furniture, into which customers can wander and imagine their own homes similarly transformed.

On Monday evening, however, Ikea’s domestic idyll was shattered as as two men entered a store in the central Swedish city of Vasteras and suddenly began attacking strangers with a knife.

Surrounded by minimalist cabinets and stainless steel appliances, the unnamed assailants set upon the unwitting shoppers, killing a woman and her son.

Ikea’s dollhouse had descended into a house of horror.

Calling the attack a “mad event,” Vasteras police investigator Per Agren said there didn’t seem to be anything connecting the killers to their victims other than their location, according to the Associated Press.

Two people died in the attack. Who are the suspects? Buried deep in the story (and not even mentioned by several other press outlets covering the event) we find out:

[Vasteras police spokeswoman] Holmgren did not identify the men, but said that they are Eritrean asylum-seekers who were living in a home for refugees in Vasteras.

Where is the Donald Trump of Sweden?

Authorities acted quickly in response to this stunning act of violence.

She added that Vasteras police have been deployed to refugee homes around the city to prevent any possible retaliatory attacks against asylum-seekers.

According to a report in the Swedish press, one of the alleged killers has been in the country for less than a month.

The man, a 23 year old, living in an asylum accommodation in Arboga and came under the civil registry to Sweden on July 13 this year.

Immigrant crime is transforming Sweden into something unrecognizable. And the results have been devastating:

- According to the Gatestone Institute, the heavily feminist Nordic country is now the “rape capital of the West,” nearing African levels of sex crime. In the majority of cases, the crime was perpetuated by people unknown to the victim. Courts have also been remarkably lenient towards offenders from immigrant backgrounds, and mainstream media outlets have actually refused to accurately report the ethnic origin of the rapists [Sweden: Rape Capital of the West, by Ingrid Carlqvist and Lars Hedegaard, Gatestone Institute, February 14, 2015].

- The city of Malmo, which is now 1/3 immigrants, has been plagued in recent months by grenade attacks and rising crime. The Main Stream Media’s main concern is that such incidents may help fuel the “far right” [Constant grenade attacks feel familiar to bomb disposal troops redeployed from Iraq to Sweden, Breitbart, August 9, 2015].

- Homeless migrants from Romania, i.e. Gypsies, are creating a national crisis by setting up camps and begging. The Sweden Democrats want to criminalize such behavior, leading to the usual worrying about the growth of the “far right” being the real problem. As even The New York Times reports, Sweden’s political leaders, instead of dealing with the problem, simply try to move it somewhere else [Poor E.U. migrants test limits of Swedish tolerance, by Stephen Castle, August 8, 2015].

Can Sweden survive? It will take a populist movement that is able to confront and displace the current political leadership and, perhaps more importantly, the media establishment. But as all of Europe nears a crisis point, look for Sweden to be the harbinger of Western revival or final collapse.