Are mobile phones wiping out our bees? 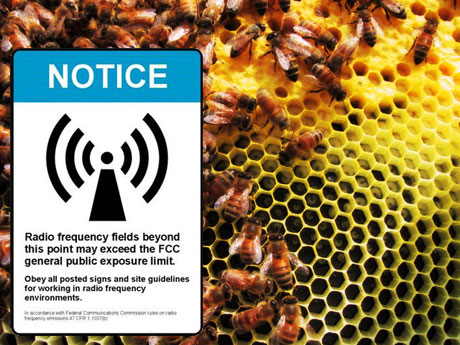 It seems like the plot of a particularly far-fetched horror film. But some scientists suggest that our love of the mobile phone could cause massive food shortages, as the world's harvests fail.

They are putting forward the theory that radiation given off by mobile phones and other hi-tech gadgets is a possible answer to one of the more bizarre mysteries ever to happen in the natural world - the abrupt disappearance of the bees that pollinate crops. Late last week, some bee-keepers claimed that the phenomenon - which started in the US, then spread to continental Europe - was beginning to hit Britain as well.

The theory is that radiation from mobile phones interferes with bees' navigation systems, preventing the famously homeloving species from finding their way back to their hives. Improbable as it may seem, there is now evidence to back this up.

Colony Collapse Disorder (CCD) occurs when a hive's inhabitants suddenly disappear, leaving only queens, eggs and a few immature workers, like so many apian Mary Celestes. The vanished bees are never found, but thought to die singly far from home. The parasites, wildlife and other bees that normally raid the honey and pollen left behind when a colony dies, refuse to go anywhere near the abandoned hives.

The alarm was first sounded last autumn, but has now hit half of all American states. The West Coast is thought to have lost 60 per cent of its commercial bee population, with 70 per cent missing on the East Coast.

CCD has since spread to Germany, Switzerland, Spain, Portugal, Italy and Greece. And last week John Chapple, one of London's biggest bee-keepers, announced that 23 of his 40 hives have been abruptly abandoned.

Other apiarists have recorded losses in Scotland, Wales and north-west England, but the Department of the Environment, Food and Rural Affairs insisted: "There is absolutely no evidence of CCD in the UK."

The implications of the spread are alarming. Most of the world's crops depend on pollination by bees. Albert Einstein once said that if the bees disappeared, "man would have only four years of life left".

No one knows why it is happening. Theories involving mites, pesticides, global warming and GM crops have been proposed, but all have drawbacks.

Now a limited study at Landau University has found that bees refuse to return to their hives when mobile phones are placed nearby. Dr Jochen Kuhn, who carried it out, said this could provide a "hint" to a possible cause.

Dr George Carlo, who headed a massive study by the US government and mobile phone industry of hazards from mobiles in the Nineties, said: "I am convinced the possibility is real."

The case against handsets

Evidence of dangers to people from mobile phones is increasing. But proof is still lacking, largely because many of the biggest perils, such as cancer, take decades to show up.

Most research on cancer has so far proved inconclusive. But an official Finnish study found that people who used the phones for more than 10 years were 40 per cent more likely to get a brain tumour on the same side as they held the handset.

Equally alarming, blue-chip Swedish research revealed that radiation from mobile phones killed off brain cells, suggesting that today's teenagers could go senile in the prime of their lives.

Studies in India and the US have raised the possibility that men who use mobile phones heavily have reduced sperm counts. And, more prosaically, doctors have identified the condition of "text thumb", a form of RSI from constant texting.

Professor Sir William Stewart, who has headed two official inquiries, warned that children under eight should not use mobiles and made a series of safety recommendations, largely ignored by ministers.