As EU Begins Deportations in Greece, Migrants Say They'd Rather Die Than Get Deported 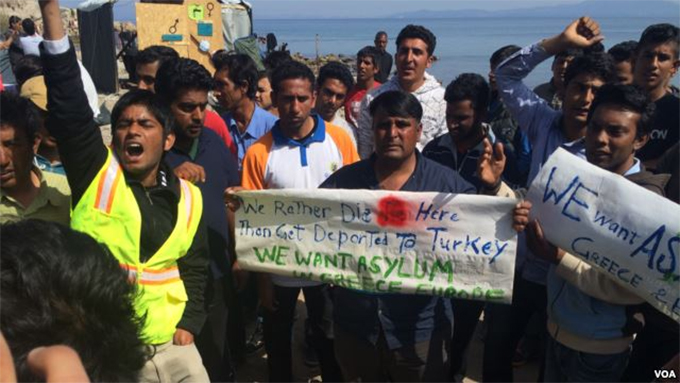 Around 10 a.m. Monday, Agma — a Pakistani electrician in a tiny tent city on a rocky Greek beach — got a call from two of his friends. They had been swept up in the systematic deportation of hundreds of people, mostly Pakistanis, from Lesbos Island.

The deportees came from Moria, a locked-down camp housing thousands of people. Surrounded by fences and barbed wire, they were not allowed to leave.

With one European Union soldier for every deportee, the travelers quietly boarded ships at daybreak. Some later arrived where many had started their harrowing journey to Europe: Izmir, Turkey.

Farak and Amjad, Agma's friends on the phone, said that after they docked, they registered with the Turkish police. They expected to be detained again, and have not been heard from since Monday afternoon.

"We are afraid they will arrest us, too," Agma told VOA at the No Borders Kitchen, Lesbos' last "free" camp where anyone can stay, and no one is locked in.

As dawn breaks, refugees and other migrants board boats to Turkey with few onlookers, as the time of their departure was kept secret from most in Lesbos, Greece, April 4, 2016. (Courtesy photo by Ali el Khalaf)

According to residents, police say the shantytown on the beach needs to be evacuated by Wednesday.

When asked where they plan to go, residents insist they will not willingly go to a camp they call a prison. "I don't know," said Mohammad, who is from Morocco. "I guess we will go to the hills."

With the camp’s closing looming and nowhere to go but the forest or a detention center, Agma and others in the camp say they have moved beyond fear and into panic.

"Every day we are scared," said Amir, a 25-year-old Algerian. "The police are coming. The army is coming to scare us."


Beyond fear is utter despair.

The road to Europe from Turkey is sometimes called "The Road of Death" because so many people die. Those who survive but are caught can be sent back, and become trapped in Turkey — penniless and despised by a public tired of bearing the brunt of the refugee crisis.

"You see that dog?" asked Younis, a young Moroccan man, pointing to one of Lesbos' many street dogs. "That dog has more rights than me."
This beach camp in Lesbos, Greece, is expected to be cleared by authorities in the coming days. Some residents say they will not go to the main camp, where they will be locked inside, April 4, 2016. (H. Murdock/VOA)

A few young men gather around, some angry, wondering what crime refugees and migrants committed to deserve to be locked up or shipped away without even having the chance to apply for asylum.

One young man wonders if part of the plan is to throw people into the sea. Another speculates that the deportations are intended to support Islamic State militants.

"The people deported now have no money, so maybe they will go to Syria to fight with Islamic State," he said bitterly, miming a machine gun in his hands. "Boom, boom, boom!"

About an hour later, what was a small group of young Pakistani men holding signs saying "We want asylum" and "We'd rather die here than get deported to Turkey," broke out in chants.

"We are human!" they shouted, before one man collapsed in the sun. Aid workers pulled him aside while the group continued to chant. Pakistanis here say they cannot go to the hospital, lest they be arrested.

Many travelers do not want to apply for asylum in Greece, a country that was facing financial woes even before the refugee influx. But at this small protest, Pakistanis say they want to stay in Greece but aren't being given the chance to apply for asylum.

In Lesbos’ last known ‘free’ camp, where people can come or go as they please, residents say there is very little to eat, and boiled potatoes are their main source of nutrition in Lesbos, Greece, April 4, 2016. (H. Murdock/VOA)

And despite a common misconception, international law gives them the right to apply for asylum.

The law does not define a refugee exclusively as a person running from a war. However, it is more likely that a person running from war is entitled to legal refugee status because "owing to a well-founded fear of being persecuted for reasons of race, religion, nationality, membership of a particular social group or political opinion" they left their country and don't want to return.

Agma, the electrician, says he left Pakistan because he was being targeted by extremist groups as a religious-freedom activist. Others among the protesters say they were businessmen, blackmailed by gangsters who threatened to kill them and their families. And other young men freely admit to leaving home because they were poor, and they heard there might be a future in Europe.

Greece says everyone is welcome to submit their applications. But Pakistanis, who make up the vast majority of the recent deportees, say they are not given the chance to exercise that right.

"If I go to the office to apply there, they will arrest me there and maybe the next day they will deport me," said Farham, a Pakistani.

Additionally, written information about asylum is distributed to newcomers in Arabic and Greek, not Urdu or English, their native and second languages.

"All the people in the European Union are not against refugees," Agma said. "Please help us."