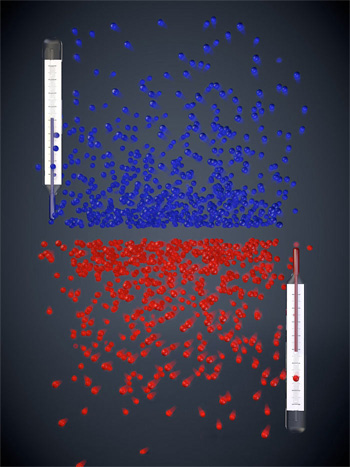 Absolute zero is often thought to be the coldest temperature possible. But now researchers show they can achieve even lower temperatures for a strange realm of "negative temperatures."

Oddly, another way to look at these negative temperatures is to consider them hotter than infinity, researchers added.

This unusual advance could lead to new engines that could technically be more than 100 percent efficient, and shed light on mysteries such as dark energy, the mysterious substance that is apparently pulling our universe apart.

An object’s temperature is a measure of how much its atoms move — the colder an object is, the slower the atoms are. At the physically impossible-to-reach temperature of zero kelvin, or minus 459.67 degrees Fahrenheit (minus 273.15 degrees Celsius), atoms would stop moving. As such, nothing can be colder than absolute zero on the Kelvin scale.

With positive temperatures, atoms more likely occupy low-energy states than high-energy states, a pattern known as Boltzmann distribution in physics. When an object is heated, its atoms can reach higher energy levels.

"The inverted Boltzmann distribution is the hallmark of negative absolute temperature, and this is what we have achieved," said researcher Ulrich Schneider, a physicist at the University of Munich in Germany. "Yet the gas is not colder than zero kelvin, but hotter. It is even hotter than at any positive temperature — the temperature scale simply does not end at infinity, but jumps to negative values instead."

Negative temperatures would be thought impossible, since there is typically no upper bound for how much energy atoms can have, as far as theory currently suggests. (There is a limit to what speed they can travel — according to Einstein’s theory of relativity, nothing can accelerate to speeds faster than light.)

To generate negative temperatures, scientists created a system where atoms do have a limit to how much energy they can possess. They first cooled about 100,000 atoms to a positive temperature of a few nanokelvin, or billionth of a kelvin. They cooled the atoms within a vacuum chamber, which isolated them from any environmental influence that could potentially heat them up accidentally. They also used a web of laser beams and magnetic fields to very precisely control how these atoms behaved, helping to push them into a new temperature realm. [Twisted Physics: 7 Mind-Blowing Findings]

"The temperatures we achieved are negative nanokelvin," Schneider told LiveScience.

Temperature depends on how much atoms move — how much kinetic energy they have. The web of laser beams created a perfectly ordered array of millions of bright spots of light, and in this "optical lattice," atoms could still move, but their kinetic energy was limited.

Temperature is linked with pressure — the hotter something is, the more it expands outward, and the colder something is, the more it contracts inward. To make sure this gas had a negative temperature, the researchers had to give it a negative pressure as well, tinkering with the interactions between atoms until they attracted each other more than they repelled each other.

"We have created the first negative absolute temperature state for moving particles," said researcher Simon Braun at the University of Munich in Germany.

Negative temperatures could be used to create heat engines — engines that convert heat energy to mechanical work, such as combustion engines — that are more than 100-percent efficient, something seemingly impossible. Such engines would essentially not only absorb energy from hotter substances, but also colder ones. As such, the work the engine performed could be larger than the energy taken from the hotter substance alone.

Negative temperatures might also help shed light on one of the greatest mysteries in science. Scientists had expected the gravitational pull of matter to slow down the universe’s expansion after the Big Bang, eventually bringing it to a dead stop or even reversing it for a "Big Crunch." However, the universe’s expansion is apparently speeding up, accelerated growth that cosmologists suggest may be due to dark energy, an as-yet-unknown substance that could make up more than 70 percent of the cosmos.

In much the same way, the negative pressure of the cold gas the researchers created should make it collapse. However, its negative temperature keeps it from doing so. As such, negative temperatures might have interesting parallels with dark energy that may help scientists understand this enigma.

Negative temperatures could also shed light on exotic states of matter, generating systems that normally might not be stable without them. "A better understanding of temperature could lead to new things we haven’t even thought of yet," Schneider said. "When you study the basics very thoroughly, you never know where it may end."

The scientists detailed their findings in the Jan. 4 issue of the journal Science.