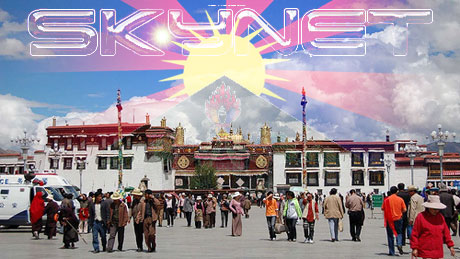 Skynet is now operational in Tibet. Beijing installed cameras in every district to monitor Tibetans. Currently, Tibetans must obtain passes from the government to enter cities.

The Skynet monitoring systems have been installed in Tibetan regions such as Ganzi in Sichuan Province. According to the Ganzi government’s website, the Skynet Project is to reinforce the public safety system and create a better environment for economic and social development. Currently, the Project has completed another installation in Batang County, which cost 1.3 million yuan (US$ 170,000) and is in the testing stage.

Kelsang, Emergency Coordinator of the Central Tibetan Administration (CTA) said, “The Skynet Project is a surveillance system to monitor the Tibetans and the temples in the entire Ganzi region.”

During the Olympics, officials in the Tibetan regions tried every possible means to stop them from going to towns to protest, according to Kelsang. The authorities told the Tibetans if they want to go into towns or cities, they must apply for a special pass from their local governments.

The reporter interviewed two residents from Baqing County in Naqu Prefecture in the Tibet Autonomous Region. One resident told the reporter he needs a pass from the local government to go into town but wasn’t sure whether the rule applied to the monks. The other also confirmed the same and expressed that it wasn’t convenient for him to talk about it on the phone.

“We also know that now all Tibetans in Tibet need the local government’s approval to go to other places, including going out of town to shop,” said Kelsang.

The authority didn’t want to see any protests from the Tibetans during the Olympics and the authority has exhausted all means to prevent Tibetans in Ganzi from protesting. In the past five months, there was a protest every couple of days in Ganzi.

According to the CTA Emergency Group, two Tibetan women, age 38 and 25, from Linlagen Village in Rongbacha, Ganzi County, applied for passes to go to downtown Ganzi on August 2. The Rongbacha Township officials denied their application. They went into town secretly that night. The next day, the two called for the independence of Tibet in public and distributed fliers to support the return of Dalai Lama. The police soon arrested them.

According to Kelsang, the two women resisted the arrest and the police fired anesthetic shots before they were put in the police car. No information on these two women could be obtained by the time of this report.