Britain's biggest banks use astrology to play the markets 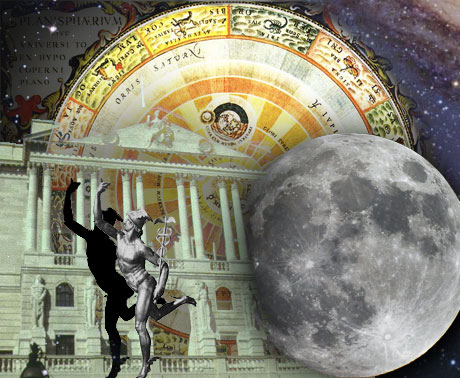 Christeen Skinner blinks at the screen of her computer and takes another slurp of coffee. It’s half past seven in the morning and she’s preparing for a crucial meeting with the chief executive of the High and Mighty fashion chain.

Apart from the black cat dozing on her lap, the only clue to Christeen’s occupation as a 21st century astrologer is a copy of an Ephemeris that lies open at a page marked “Mercury March 25th”.

“The financial crisis has ensured that I’m busier than ever,” says Christeen. “People in the City need to know what is just around the corner. I can help with that.”

Christeen is one of a growing, albeit secretive, network of astrologers who work for seemingly conservative British institutions such as high street banks, City investment funds and retailers. Desperate to avoid financial meltdown in the ongoing ‘credit crunch’ and to spot fashions and consumer trends before they start, these institutions have turned to the stars to divine the future.

“Most academics distrust astrology and regard it as mumbo-jumbo,” she says. “The thing is, it works. Nobody’s sure how it works but it does. Most of my clients are businesspeople who are very canny. If it didn’t work for them, then why would they use it?”

One of Christeen’s clients is Judith Levy, chief executive of the High and Mighty retail chain.

“I’m fairly pragmatic,” says Judith. “I will only spend money on an astrologer if the decision I have to take is very important - the kind of decision which will cost me a lot of money if I get it wrong.

“When we launched our Kayak brand a few years ago we used astrology to decide the launch date. Since then, it has gone from strength to strength. It’s one of our best selling brands.”

Astrology is generally seen as just a bit of harmless fun with no predictive power at all. After all, how can a star have any influence over our lives when it is so distant that its light takes hundreds of millions of years just to reach us? The answer to that is simple: it doesn’t.

For believers in heliocentric astrology, the branch of the discipline currently in vogue with business folk and fashion designers alike, it is the planets that appear to have an influence over us not the stars. They maintain that each planet has a subtly different effect on our behaviour, which varies as it sweeps through the zodiac during its journey around the sun.

Mercury, for instance, can be generally positive apart from when it turns ‘retrograde’. This happens when it appears to reverse direction and travel backwards through the zodiac. When this happens, roughly three times a year, communication begins to break down and travel plans may go awry. It’s seen as a celestial spanner in the works.

It’s Mercury’s potential to wreak havoc that has led many world leaders and military figures to plan their lives and campaigns to avoid its influence. Ronald Reagan and Boris Yeltsin would only travel and hold press conferences when the planets, specifically Mercury, dictated.

Hitler, a keen user of astrology, notably failed to take into account Mercury’s influence. He launched the Battle of Britain and planned operation Sealion – the invasion of the UK – just as Mercury turned retrograde. Both mistakes dealt serious blows to his plans for world domination.

Mars seems to have an uncanny correlation with over-achievement for those lucky enough to be born with the planet at certain critical astrological positions. The French statistician Michel Gauquelin discovered that the upper echelons of numerous sports, as well as the medical profession and the military, are stuffed full of people with Mars in these locations. For example, Nick Faldo, OJ Simpson and Muhammad Ali were all born with Mars in the requisite position.

And so far at least, nobody has managed to rubbish Gauquelin’s research.

But the effects of the planets pale into insignificance when compared to the influence of the moon, claim astrologers. When the moon is full, a powerful mischievous energy fills our souls, hence the term ‘lunatic’. This is most noticeable on the streets, where drunken violence increases and road casualties peak.

According to the police in Brighton, a full moon brings out the worst in the British hooligan. Cases of anti-social behaviour rise noticeably and commanders routinely deploy more police, hospitals prepare for a rise in casualties from pub brawls, and the fire brigade readies itself for more incidents.

“There is definitely a trend,” says Inspector Andy Parr, who is responsible for patrols in Brighton at weekends. “With each full moon the number of disturbances recorded increases significantly.”

“I'm aware that this is just one of many things that can influence public disorder but if you speak to ambulance staff they will tell you exactly the same,” he says. “It may be dismissed as an old wives' tale but there's plenty of other research to suggest that the moon has an impact on human behavioural patterns.”

There’s some academic evidence to back up these claims too. A study published by German scientists in 2000 claimed the full moon sparked a rise in binge drinking. The scientists checked the police arrest reports and blood-alcohol tests of 16,495 offenders. Most of those with an excess of 2ml of alcohol per 100ml of blood – the definition of drunk under German law - had been caught during the five-day full moon cycle.

Sceptics will no doubt point out that there’s no conceivable mechanism for the moon to affect our behaviour. In other words, astrology is just bunkum.

Professor Chris French, a parapsychologist at Goldsmiths, University of London, certainly thinks so.

“It’s just not true,” he says. “Hundreds of studies disprove astrology. There are all kinds of reasons why people might want to believe in these things for solid psychological reasons but that does not make astrology true.”

Dr Percy Seymour, an astrophysicist recently retired from Plymouth University, disagrees. He’s spent decades studying astrology and has come up with a theory as to how it might actually work. Crucially, his ideas do not violate any of the laws of physics although they may over-tax some people’s credulity.

Dr Seymour believes that low frequency magnetic fields emanating from the sun interact with those of the Earth, which in turn affects the functioning of the human brain.

“The magnetic field of the sun can be affected by the movement and position of the planets,” he says. “Having said all that, I don’t believe that the cosmos controls us but it can influence us.”

It’s a neat theory but does it stand up to scrutiny?

Jim Porter, chief technical analyst for one of the UK’s largest banks, believes it does. He uses heliocentric magi astrology to predict the direction of the international financial markets. Millions of pounds worth of commodities, shares and currencies are traded on his command. His decisions may affect the value of your pension, your home, and perhaps decide whether or not you have a job tomorrow.

When I spoke to him late last year, he told me that the position of the planets indicated a 3.2 percent fall in the American markets. The following week they duly fell 3.5 percent.

“My attitude is that if you can test it, and it works, then it’s just another tool that you can use to predict the direction of the markets,” he says.

“I have tested it and astrology works. Used with other techniques it can give you confidence, and the more confidence you have, the bigger the risks you can take.”

Jim has recently compiled a report for a major central bank charting the likely economic trends of the coming few years. According to Jim’s forecasts, the economy and the financial and housing markets all face a rocky road and have a dismal short-term future.

“At the moment,” he says. “Mars in Cancer is in opposition to Pluto in Capricorn. This indicates a polarisation of opposing sentiments – turmoil, in other words. This cycle ends around 6th April.”

“Sentiment will then recover and will turn down in early August. That phase will last for 4-5 weeks. There will be another shake in October.

“In 2012 we’ll be entering the precession of the equinoxes, which is the most important thing that’s happened in the last 26,000 years. That suggests that something mega is going to happen. There will be a huge change in the world’s psychology caused by a huge natural disaster or a massive change in spiritual beliefs.

“We have an interesting four years ahead of us.”

If you are like me and the rational half of your brain screams ‘It can’t possibly be true!’ whilst the other half is a bit confused, then maybe you should remember that people seem to be making money from astrology. And perhaps that’s the acid test.