May 2, 2013 By Henrik Palmgren | redice.tv
The EU Observer has published the following article outlining Zbigniew Brzezinski’s suggestion of centralizing control and creating a trans-Atlantic trade bloc composed of all the western democracies, in order to compete with the juggernaut of Chinese power.

Zbigniew Brzezinski, in his various roles throughout the decades of advising and shaping American foreign policy, has always worked from the shadows. His machinations are famously laid out in his books, such as The Grand Chessboard.

It’s apparent from his most recent comments that the manipulation continues to this day. 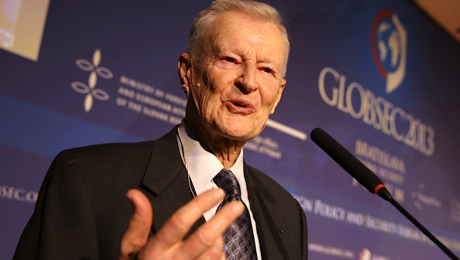 Mr. K.L. brought this to my attention, and as we’re all bankster-watching and Germany-Europe-watching, it’s worth commenting upon. It seems that Rockefailure lap-poodle and sock puppet, and former National Security Advisor to President Peanut….er….Carter, Mr. Zbgnw Brzznsk (try it, you’ll like it, it just rolls off the tongue, a pleasure to pronounce, a wonder to experience), is at it again, and this time it’s a doozie, for it seems the old guy may be suffering from a momentary bout of sanity and humanity:

“He recalled drinking a beer in the Slovak capital with Czech artist-politician Vaclav Havel shortly after the fall of the Iron Curtain and having ‘a kind of exuberant feeling’ about the future of Europe and the emergence of the US as a benign superpower.

“But he said Europe failed to fulfil its promise, while the US weakened itself by invading Iraq.

“Europe’s main problem is that today’s European Union is a Europe more of banks than of people, more of commercial convenience than an emotional commitment of the European peoples,” he said.

“He criticised the UK for putting the interests of The City above all else. He said some eastern countries treat the EU as “a piggy bank” of subsidies, while “complacent” and “self-indulgent” southern countries’ top priority is to get bailouts from the north.

“‘In Western Europe today, there is a dearth of historical imagination and of global ambition. There is no Churchill, no De Gaulle, no Adenauer. Current political discourse is dominated by narrow perspectives,’ he noted, referring to Europe’s post-WWII political giants.

“‘Europe’s lack of global ambition makes for excessive reliance on America [as a security provider] and makes the American public more sceptical of Europe,’ he added.

“On the US side, he said the $3 trillion Iraq war hobbled its economy and delegitimised its authority.

“‘Just think of the recent UN vote on Palestine’s status … The Americans organised a worldwide diplomatic effort to prevent it from happening and out of 190 countries, it gained seven supporters,’ he said.

Did Zbignw, Tin Man that he is, suddenly find a heart; did the man behind the curtain give him a brain?

Hardly. This is, after all, the man who wrote Between Two Ages and The Grand Chessboard, whose cold-blooded geopolitical technocratic prose truly has to be read to be believed. He does have it right in part: America’s post-9/11 “war on everyone who smells like a terrorist” has meant a vast expansion of America’s military presence in Central Asia and the Middle East, all an effort, we are reminded in The Grand Chessboard, to control the vast resources of Central Asia and to deny them to China and Russia. Is the EU primarily about the banksters and for the banksters? Well, of course it is. And are U.S. policies and actions increasingly the cause of the lack of any real friends? Well, of course they are. Are people getting fed up? Well, ask Australia and France: both countries recently concluded agreements with China to conduct trade with each other by-passing the dollar completely, and using direct convertibility. After the financial scandals rocking the City of London and Wall Street, can you blame them?

Thus, Brzznsk’s tears are crocodile tears, for his is the basic policy that is being followed. He may quibble about this or that detail, but it is nonetheless his basic policy (along with Samuel Huntington and a few others).

Which brings us to Brzznsk’s latest brain child:

“In the context of China’s growing economic and military power, he said the creation of an EU-US free trade zone could revive trans-Atlantic relations and create a new geopolitical equilibrium.

“‘There is enormous promise in that concept,’ he said.

“‘It can create additional trans-Atlantic bonds … It can shape a new balance between the Pacific and the Atlantic oceanic regions, while at the same time generating in the West a new vitality, more security and greater cohesion,’ he added.”

Uh huh…. we believe you Zbg, we really do.

“Noting that the European Commission will in future be able to veto member states’ national budgets under the so-called European Semester laws, he said: “The commission in its history never had more power than it has now.”

“But he wondered what will happen when Brussels tries to wield its new instruments.

“‘In September or October, the commission will send letters to Estonia or to France saying: ‘Show us your budgets. We want to see them first to see if they’re sustainable.’ Then we will have to have a conversation on how to combine this deeper integration with democratic scrutiny,’ he said.

“‘When I present this to the Bundestag … people might say: ‘Who is this man from Brussels telling us what to do?’, he noted.”

There it is, the cat is out of the bag: the real problem is the tug-of-war that’s been quietly going on between London and Wall Street on the one hand, and Berlin and Frankfurt on the other. The problem is, to recall Brrznsk’s own words, how to deal with the reality of German power. Perhaps the way to deal with it is to create a trading bloc, and gradually have Brussels chip away at American sovereignty too, so that, with American power backing it up, Brussels can indeed dictate to Berlin.

Read the full article at: gizadeathstar.com