May 24, 2010 Source: technorati.com
I received an email today updating me on the strange case of Lachezar Filipov. 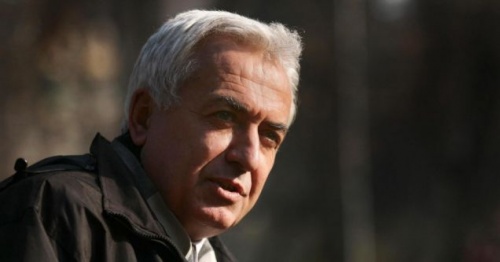 On November 26, 2009, London’s Daily Telegraph and Daily Mail reported that Filipov, [above], deputy director of the Space Research Institute (NASA equivalent) of the Bulgarian Academy of Sciences, had announced that, "aliens are currently all around us, and are watching us all the time." He claimed that he and a team of BAS scientists had interviewed several aliens (by means not disclosed) and that the answers to their questions were encoded in crop circle formations. According to the Telegraph, BAS issued a report on these communications, but I’ve yet to find it online.

A Phoenix-based paranormal talk radio host named Kevin Smith says he contacted Filipov by phone shortly after the articles were published and Filipov agreed to be interviewed, saying it was his "duty" to make his team’s discoveries public.

Then, Smith says, the good doctor stopped answering his cell phone. Days of radio silence passed before a Croatian news team was allowed to interview Filipov in the lobby of the Academy of Sciences building in Sofia, but the 19-minute interview was not used because, according to the news team, Filipov was "intoxicated."

Smith says he obtained a copy of the interview video, which included many close-ups of Filipov’s face, and, in Smith’s opinion, Filipov was suffering from sleep deprivation. A former international policeman, Smith says that Filipov showed no signs of HGN (Horizontal Gaze Nystagmus), which always accompanies alcohol intoxication. He also points out that sleep deprivation is a favorite tool of the gone-but-still-active Darzhavna Sigurnost, or Bulgarian KGB.

So what happened? Did the Bulgarian Academy of Sciences establish a dialogue with extraterrestrials? Did its deputy director then go rogue, announcing to the media that this communication had occurred? And did the Bulgarian KGB, in an attempt to discredit him, then "prepare" the deputy director for his interview with a Croation news team?

Hallucination is another possibility, of course. As are substance abuse and outright deceit. As to the last possibility, the questions arise: "who’s deceiving whom? And why?" The Telegraph refers to recent "heated debate" over "the role, feasibility, and reform of the Bulgarian Academy of Sciences," so maybe Filipov’s announcement was only a bizarre and deeply misguided publicity stunt.

The email that I received from Smith today confirmed that he had viewed “the entire 19-minute video of the interview attempt by a Croatian TV news crew after Filipov had been handled for about 10 days.”

“That video,” Smith said, “has never been released by them, but it is most instructive. The reporter asks over and over if the aliens are in communication with us and Filipov finally says, ‘That is the information that if I tell you, they will kill me.’”

Make of it what you will.