Celebrate the beginning of the Fifth day - November 24, 2006 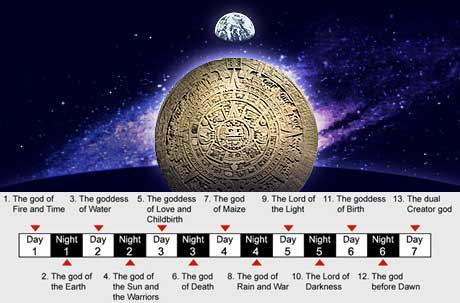 We are currently approaching the beginning of the Fifth day of the Galactic Underworld, November 24, 2006 and most people have experienced how things have heated up since the midpoint of the current night, May 27, 2006. In fact, the evolution of consciousness is fundamentally driven by the Light of future Heavens and Underworlds and so we are already now being influenced by it both in the form of world events and personal experiences.

In each of the Underworlds the Fifth day is the era of the breakthrough of the phenomena of that particular Underworld and from this we may have certain expectations of what is to come. The overall purpose of the current Galactic Underworld is to bring a balance between East and West as well as between the left rational and the right intuitive brain hemispheres. In short, as it will mean a significant downfall of western dominance in the world it will allow for the coming together of the cultures of the East and the West. Very likely, it will generate a downfall of the American dollar and ensuing altered economic relationships in the world.

It also seems as if the days are the periods that bring the most earth changes and natural catastrophes and this will very likely also mark the coming day, November 24, 2006 – November 19, 2007. It simply seems as if when human beings are regaining their inner wholeness their control of the external world as a consequence is lost and the Fifth day is exactly such a period, which will create the conditions for such inner unity and wholeness. Part of the development of this inner wholeness will come from a major step forward in the development of our intuition which essentially is mediated by the right brain half that is now about to be strengthened. In fact, without the development of this intuition we will not be able to use the increasingly shorter windows of opportunity that in different ways will be presented to us.

What there is to do is to fully accept and embrace the very significant energy shift that is now brought by the beginning of the Fifth day and I recommend people everywhere to celebrate on November 23-24 the arrival of the energy of Quetzalcoatl as part of the Breakthrough Celebration (www.breakthroughcelebration.com). The Fifth day energy of the Galactic Underworld means that its manifestations will truly break through into the world and after this it will become apparent to everyone that we will never again return to the stable materialist mind set of the lower Planetary Underworld. We must welcome the shift that is now taking place in the global energy field and the opportunity it gives us to create balance between East and West, rationality and intuition and man and woman. For most people the Breakthrough Energy of the Fifth day will be the most powerful transformative energy that they experienced as part of the divine plan. Let us celebrate and prepare together and above all be conscious of the changes that we may now expect based on the Mayan calendar.