Changes in the Sun’s Surface to Bring Next Climate Change 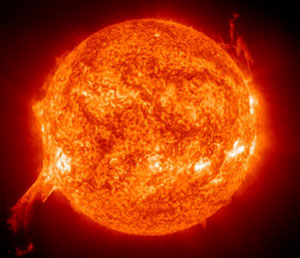 Today, the Space and Science Research Center, (SSRC) in Orlando, Florida announces that it has confirmed the recent web announcement of NASA solar physicists that there are substantial changes occurring in the sun’s surface. The SSRC has further researched these changes and has concluded they will bring about the next climate change to one of a long lasting cold era.

Today, Director of the SSRC, John Casey has reaffirmed earlier research he led that independently discovered the sun’s changes are the result of a family of cycles that bring about climate shifts from cold climate to warm and back again.

“We today confirm the recent announcement by NASA that there are historic and important changes taking place on the sun’s surface. This will have only one outcome - a new climate change is coming that will bring an extended period of deep cold to the planet. This is not however a unique event for the planet although it is critically important news to this and the next generations. It is but the normal sequence of alternating climate changes that has been going on for thousands of years. Further according to our research, this series of solar cycles are so predictable that they can be used to roughly forecast the next series of climate changes many decades in advance. I have verified the accuracy of these cycles’ behavior over the last 1,100 years relative to temperatures on Earth, to well over 90%.”

As to what these changes are Casey says, “The sun’s surface flows have slowed dramatically as NASA has indicated. This process of surface movement, what NASA calls the “conveyor belt” essentially sweeps up old sunspots and deposits new ones. NASA’s studies have found that when the surface movement slows down, sunspot counts drop significantly. All records of sunspot counts and other proxies of solar activity going back 6,000 years clearly validates our own findings that when we have sunspot counts lower then 50 it means only one thing - an intense cold climate, globally. NASA says the solar cycle 25, the one after the next that starts this spring will be at 50 or lower. The general opinion of the SSRC scientists is that it could begin even sooner within 3 years with the next solar cycle 24. What we are saying today is that my own research and that of the other scientists at the SSRC verifies that NASA is right about one thing – a solar cycle of 50 or lower is headed our way. With this next solar minimum predicted by NASA, what I call a “solar hibernation,” the SSRC forecasts a much colder Earth just as it has transpired before for thousands of years. If NASA is the more accurate on the schedule, then we may see even warmer temperatures before the bottom falls out. If the SSRC and other scientists around the world are correct then we have only a few years to prepare before 20-30 years of lasting and possibly dangerous cold arrive.”

When asked about what this will mean to the average person on the street, Casey was firm. “The last time this particular cycle regenerated was over 200 years ago. I call it the “Bi-Centennial Cycle” solar cycle. It took place between 1793 and 1830, the so-called Dalton Minimum, a period of extreme cold that resulted in what historian John D. Post called the ‘last great subsistence crisis.’ With that cold came massive crops losses, food riots, famine and disease. I believe this next climate change will be much stronger and has the potential to once more cause widespread crop losses globally with the resultant ill effects. The key difference for this next Bi-Centennial Cycle’s impact versus the last is that we will have over 8 billion mouths to feed in the next coldest years where as we had only 1 billion the last time. Among other effects like social and economic disruption, we are facing the real prospect of the ‘perfect storm of global food shortages’ in the next climate change. In answer to the question, everyone on the street will be affected.”

Given the importance of the next climate change Casey was asked whether the government has been notified. “Yes, as soon as my research revealed these solar cycles and the prediction of the coming cold era with the next climate change, I notified all the key offices in the Bush administration including both parties in the Senate and House science committees as well as most of the nation’s media outlets. Unfortunately, because of the intensity of coverage of the UN IPCC and man made global warming during 2007, the full story about climate change is very slow in getting told. These changes in the sun have begun. They are unstoppable. With the word finally starting to get out about the next climate change, hopefully we will have time to prepare. Right now, the newly organized SSRC is the leading independent research center in the US and possibly worldwide, that is focused on the next climate change. Some of the world’s brightest scientists, also experts in solar physics and the next climate change have joined with me. In the meantime we will do our best to spread the word along with NASA and others who can see what is about to take place for the Earth’s climate. Soon, I believe this will be recognized as the most important climate story of this century.”

More information on the Space and Science Research Center is available at: www.spaceandscience.net

The previous NASA announcement was made at: http://science.nasa.gov/headlines/y2006/10may_longrange.htm