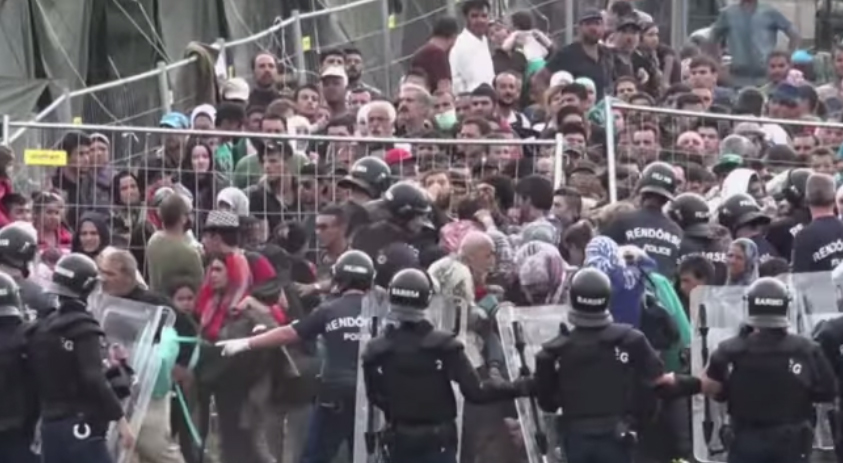 The home of Martin Luther and the Protestant Reformation is now being overrun with an invading force of the followers of Muhammad. Germany has opened the floodgates of the antichrist following Muslims and now they are seeing the devastating consequences, but Germany seeks to coverup the crimes of the religion of pieces.

Islamic gangs in Germany have broken into schools and churches and plundered collection boxes, crosses and other valuable and sacred objects used in church services, according to prosecutors.

From the schools, the men stole laptops, money and a cash card, which they used to finance ISIS jihadist fighters seeking to topple the regime of Syrian president Bashur al-Assad, alleged chief prosecutor Nadja Gudermann.

The pilfered churches were in the area around Cologne, a city known for its many historic and beautiful churches including a soaring cathedral.

In all, the Muslim gangs are accused of stealing more than $21,000 worth of goods.

While these numbers represent break-ins that occurred between 2011 and 2014, these crimes have escalated as Muslim invaders have been brought in by the tens of thousands into Germany.

In a riot back in August, twenty Muslim refugees tried to lynch an Afghan man after he tore pages from the Koran and tossed them in a toilet. When police arrived, the group of Islamists attacked them as well. Seventeen people were injured in the incident.

Then there is this report from the German publication Die Welt (Google Translation):

In a refugee camp in Hamburg-Eidelstedt may have been beaten on religious grounds and seriously injured on Sunday a 24 year old Iranian. An Afghan had attacked him with a telescopic baton, police said. The Iranians have a few days prior to the attack told the Afghans that he had converted to Christianity. Then, the Afghan had declared that it was no sin in the case of killing the 24-year-old, police said.

The 24-year-old had collapsed unconscious after the attack. 15 to 20 other residents of the reception center in a former hardware store kept the attacker first established. But then he can tear yourself away and flee. The accused is known by name. The investigation took over the State Protection Department in the Office of Criminal Investigation.

Additionally, German correspondent Alexander Benesch wrote concerning Muslim refugee camps in Germany, "It is about an internment facility in Hessen where they initially put the refugees for further processing. It mentions a lack of security for women and children, leading to rape, molestation and (reportedly but not verified) forced prostitution."

Then there is the coverup of these atrocities by the German government and media.

Horst Seehofer, the leader of Christian Social Union (CSU), the Bavaria-based sister party to Chancellor Angela Merkel's Christian Democrats (CDU), painted a grim picture, saying that Merkel's open border policy "was a mistake that will occupy us for a long time yet. I see no possibility of putting the stopper back into the bottle."

German media is in lockstep with the government, giving happy-talk and a positive spin on migrant crisis of gigantic proportions hitting Europe.

German newspapers and media outlets have suppressed the stories of rampant rape and child abuse among the migrants housed in government-run accommodations. In a recent letter addressed to the Minister of Integration and Social Affairs in the state of Hesse, prominent women's organizations have described the culture of rape and violence perpetuated by male migrants -- right under the nose of German authorities. The letter states:

"It is a fact that women and children [at HEAE accommodation facility, under the supervision of Administrative District of Giessen] are unprotected. This situation is opportune to those men who already regard women as their inferior and treat unaccompanied women as 'fair game.' As a consequence, there are reports of numerous rapes, sexual assaults and increasingly of forced prostitution. ... These are not isolated incidents."

According to the letter, women were terrified to walk in the camp even during the day.

Meanwhile, Germans have taken to the streets to oppose the invading of their country in protests and blockading busloads of Muslim migrants from coming into their towns. However, it appears their Chancellor is siding with the Muslims.