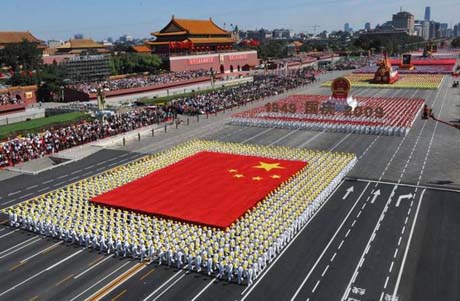 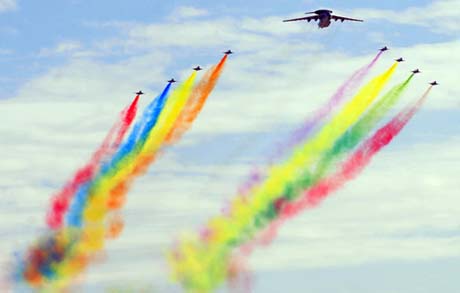 The Chinese air force claimed today that the biggest weather modification operation in the country's history cleared the skies over Tiananmen Square just in time for the National Day parade.

I write this post under gorgeously azure skies. Instead of the dull haze I have grown used to in Beijing over the past few years, the light is so sharp that it almost hurts my eyes.

The transformation is so dramatic it is eerie. When I flew into Beijing yesterday, the city was shrouded in what looked like a thick smog.

Weather forecasters said it would rain around midnight and, hey presto, the first drops of rain started to fall almost on the dot.

Even so, when I left the house at 4am this morning, it was still so gloomy that my taxi driver slowed the car because visibility was poor. "Wuran" (pollution), he explained.

But was it? By 5.30am, when I arrived at the media centre for the National Day parade, the skies had cleared sufficiently to be able to see a star. But there were still thick clusters of cloud and some mist. It might rain again, I thought.

We were bussed to the press gallery outside the Forbidden City by about 7.20am. A band of cumulus lingered over the Great Hall of the People. They had darkened when I called a friend an hour later.

Just before I rang off, I described the skies to him. "It might still rain on the parade, but I think the odds are now on their [the organisers'] side," I said.

Once the march started, I concentrated on that, but I recall being impressed by the unusual vividness of the sky on some of the images on the giant screens.

Other colleagues told me they found it remarkable that the clouds seemed almost to be held back from the square, even though there were still some around the edges.

By the time of the fly-past around 11am, the skies were clear until air force jets left behind lines of coloured smoke-trails. Now, six hours later, Beijing is still enjoying perfect conditions.

What happened? According to Chinese Meterology News, there were four attacks on a bank of clouds that approached Tiananmen from the south-west between 7.30am and 9.05am. In total 432 rockets were fired to achieve the desired result.

Xinhua news agency reports that the authorities also had the capacity to delay rainfall.

"Only a handful countries in the world could organise such large-scale magic-like weather modification," it quoted Cui Lianqing, a senior air force meteorologist as saying.

But cloud seeding is generally considered far too imprecise a technique to guarantee the results seen today, which begs several questions. If clearing the skies is this easy, why don't the authorities do it all the time? Is it the cost? Concern about over-use of chemicals? Or were the authorities just lucky today?