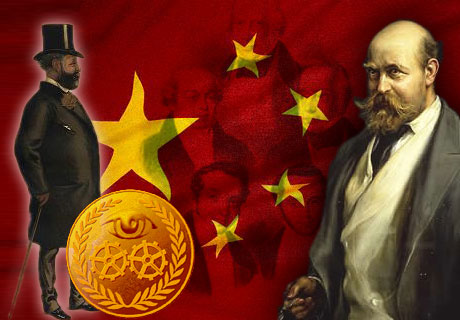 The Battle of Waterloo. The deaths of six US presidents. The rise of Adolf Hitler. The deflation of the Japanese bubble economy, the 1997-98 Asian financial crisis and even environmental destruction in the developing world.

In a new Chinese best-seller, Currency Wars , these disparate events spanning two centuries have a single root cause: the control of money issuance through history by the Rothschild banking dynasty.

Even today, claims author Song Hongbing, the US Federal Reserve remains a puppet of private banks, which also ultimately owe their allegiance to the ubiquitous Rothschilds.

Such an over-arching conspiracy theory might matter as little as the many fetid tracts that can still be found in the west about the “gnomes of Zurich” and Wall Street’s manipulation of global finance.

But in China, which is in the midst of a lengthy debate about opening its financial system under US pressure, the book has become a surprise hit and is being read at senior levels of government and business.

“Some senior heads of companies have been asking me if this is all true,” says Ha Jiming, the chief economist of China International Capital Corp, the largest local investment bank.

The book also gives ammunition, however hay-wire, to many in China who argue that Beijing should resist pressure from the US and other countries to allow its currency, the renminbi, to appreciate.

The book’s publisher, a unit of the state-owned CITIC group, said Currency Wars had sold nearly 200,000 copies, with an estimated 400,000 extra pirated copies in circulation as well.

Mr Song, an information technology consultant and amateur historian who has lived in the US since 1994 and is now based in Washington, says his interest was sparked by trying to uncover what lay behind the Asian crisis in 1997.

After he began blogging some of his findings, his friends suggested he find a publisher for a longer work. He professes himself surprised by the book’s success.

“I never imagined it could be so hot and that top leaders would be reading it,” he says during a book tour in Shanghai. “People in China are nervous about what’s going on in financial markets but they don’t know how to handle the real dangers. This book gives them some ideas.”

The thing that most shocked him, he says, was his “discovery” that the Fed is a privately owned and run bank. “I just never imagined a central bank could be a private body,” he says.

The Fed does describe itself “as an unusual mixture of public and private elements”. While its seven governors are all appointed by the US president, private banks do hold shares in its 12 regional reserve banks.

But Mr Song ignores the government’s role and argues that the Fed’s key functions are ultimately controlled by five private banks, such as Citibank, all of which have maintained a “close relationship” with the Rothschilds.

Mr Song is defensive about his focus on the Rothschilds and what the book depicts as their Jewish clannishness.

“The Chinese people think that the Jews are smart and rich, so we should learn from them,” he says. “Even me, I think they are really smart, maybe the smartest people on earth.”

Jon Benjamin, chief executive of the Board of Deputies of British Jews, is not impressed. “The Chinese have the highest regard for what they see as Jewish intellectual and commercial acumen, with little or no concurrent culture of antisemitism. This claim, however, plays to the most discredited and outmoded canards surrounding Jews and their influence. That it should gain currency in the world’s most important emerging economy is a great concern.”

The book has been ridiculed in internet postings in China, for exaggerating the lingering influence of the Rothschilds and being a re-write of existing conspiracy theories in the west.

Mr Ha puts the book’s popularity down to the decade-long stagnation in Japan and the Asian financial crisis, which he says had a profound impact on many Chinese policymakers.

Such officials remain deeply suspicious of advice from western countries to open up the financial system and float the currency. “They think it is just a new way of looting developing countries,” Mr Ha says.

Mr Song himself has been commissioned to write a number of new books to capitalise on his success, on the yen, the euro and also on China’s financial system.

But in conversation, he sounds hesitant about the line his future tomes might take. “This book may be totally wrong, so before the next one, I have to make sure my understanding is right,” he says.

“Before this book, I was a nobody, so I could say anything I liked, but now the situation has changed.”