A Chinese investment firm on Thursday announced plans to resurrect London’s Crystal Palace, once the largest glass structure in the world.

The planned £500 million ($800 million, 600 million euro) re-creation by the ZhongRong Group is on the same size and scale as Joseph Paxton’s original cast iron and plate glass masterpiece.

This handout picture, obtained on October 3, 2013 from ZhongRong Group, shows an artist’s illustration of Crystal Palace post-restoration
The Crystal Palace was built in central London’s Hyde Park for the 1851 Great Exhibition of wonders from across the globe, but moved to a hilltop dominating south London in 1854. 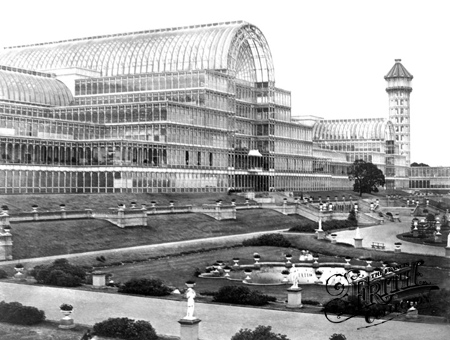 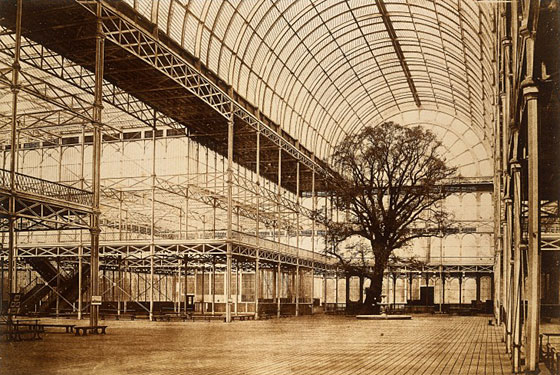 Source: Victoria and Albert Museum, London
The building, a marvel of the Victorian age, burnt down in 1936, although the area is still known as Crystal Palace.

The Italian-style terraces on which it stood are now empty and grassed over.

The plans involve turning the site into a major new cultural destination and restoring the surrounding 180-acre (73-hectare) public park through landscaping, planting and new facilities.

"London is renowned across the world for its history and culture and the former Crystal Palace is celebrated in China as a magnificent achievement," said ZhongRong Group chairman Ni Zhaoxing.

"This project is a once-in-a-lifetime opportunity to bring its spirit back to life by recreating the Crystal Palace and restoring the park to its former glory."

Read the full article at: newsdaily.com
1862: Dostoevsky on the new world order

The immense town [London], forever bustling by night and by day, as vast as an ocean, the screech and howl of machinery, the railways built above the houses (and soon to be built under them), the daring of enterprise, the apparent disorder which in actual fact is the highest form of bourgeois order, the polluted Thames, the coal-saturated air, the magnificent squares and parks, the town’s terrifying districts such as Whitechapel with its half-naked, savage and hungry population, the City with its millions and its world-wide trade, the Crystal Palace, the World Exhibition…

The Exhibition is indeed amazing. You feel the terrible force which has brought these innumerable people, who have come from the ends of the earth, altogether into one fold; you realize the grandeur of the idea; you feel that something has been achieved here, that here is victory and triumph. And you feel nervous. However great your independence of mind, a feeling of fear somehow creeps over you. Can this, you think, in fact be the final accomplishment of an ideal state of things? Is this the end, by any chance? Perhaps this really is the ‘one fold’? Perhaps we shall really have to accept this as the whole truth and cease from all movement thereafter?

It is all so solemn, triumphant, and proud that you are left breathless. You look at those hundreds of thousands, at those millions of people obediently trooping into this place from all parts of the earth – people who have come with only one thought in mind, quietly, stubbornly and silently milling round in this colossal palace, and you feel that something final has been accomplished here – accomplished and completed. It is a Biblical sight, something to do with Babylon, some prophecy out of the Apocalypse being fulfilled before your very eyes...
Source

History of Britain The Great Exhibition : The first half of this video speaks on the Crystal Palace and the Exhibition

The Crystal Palace, the epitome of the Industrial Revolution…or just sheer arrogance?
From: All Things Global History

In 1851 Great Britain was arguably the leader of the industrial revolution and feeling very secure in that ideal. The Great Exhibition of 1851 in London’ Crystal Palace was conceived to symbolize this industrial, military and economic superiority of Great Britain. Just representing the feats of Britain itself would have excluded many of the technological achievements pioneered by the British in its many colonies and protectorates, so it was decided to make the exhibit truly international with invitations being extended to almost all of the colonized world. The British also felt that it was important to show their achievements right alongside those of “less civilized” countries. The prevailing attitude in England at the time was ripe for the somewhat arrogant parading of accomplishments. Many felt secure, economically and politically, and Queen Victoria was eager to reinforce the feeling of contentment with her reign. It was during the mid-1850s that the word “Victorian” began to be employed to express a new self-consciousness, both in relation to the nation and to the period through which it was passing.

Now when we get further into the Pandora’s box that is Industrialization, the question comes up, did the Crystal Palace symbolize the strengths of the Industrial Revolution or the arrogance of it all? 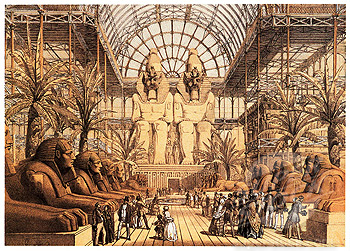 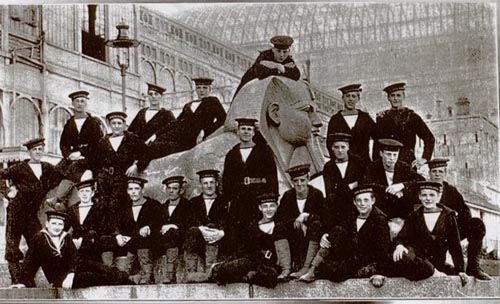 ’With the Royal Naval Division on board HMS Crystal Palace & Elsewhere’ Souvenir N.2, published by W. H. Smith & Son (Arden Press). Paxton’s ’Crystal Palace’ itself is seen in the background 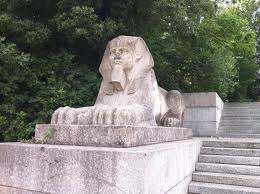