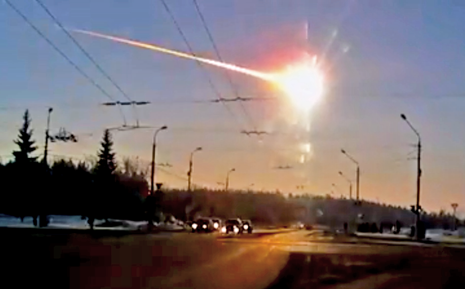 When the Chelyabinsk meteor streaked across the dawn sky leaving an ominous trail of smoke behind it and blasting the earth with explosions and epic sonic booms, the force of which blew out windows and rocked buildings, assuredly many people thought it was the end of days. 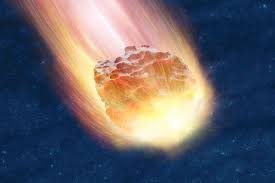 Luckily, it wasn’t the Apocalypse.
The meteor was frighting, but also amazing, and while over 1,600 people were injured by flying glass and shrapnel, there were no fatalities, and incredible videos of the close call zoomed around the globe almost as quickly as the meteor itself.

Even though the meteor broke up over Russia, because of modern instant communication the event turned into almost a global phenomenon, and with so many fascinated (and humbled) people, there was going to be many ways to interpret the event.

Humans have ever seen other-worldly, supernatural and religious significance in the heavens, and now in the city of Chelyabinsk a ’Church of the Meteorite’ has been set up. The members reportedly worship the space rock - indeed, the founder of the church believes it contains “a set of moral and legal norms that will help people live at a new stage of spiritual knowledge development.” Source Meteor worshippers are undeterred by scientists identifying the rock as an ordinary chondrite, "(the most common type of meteorite that falls to Earth)".

This is far from the first time that space rocks have been ascribed spiritual or religious prestige. The earliest humans marveled at and often lived in fear of
extraordinary events in the sky, whether they were the auroras, thunder and lightning, eclipses, or meteors. It’s not surprising that an object originating from the heavens would be held in highest significance.

Ancient Egyptians incorporated meteorites into symbolic objects or jewelry, creating objects of ’power’. An ancient gem in Pharaoh Tutankhamun’s adornments is thought to have been created by a blast more powerful than modern atomic bombs.

A famous and important Muslim relic is the Black Stone of Kaaba, an ancient stone that many say is a meteor. "It is the eastern cornerstone of the Kaaba, the ancient stone building towards which Muslims pray, in the center of the Grand Mosque in Mecca, Saudi Arabia." Source

Even now, the coveted moon rocks retrieved from the Apollo missions are granted a ’relic’ status, although in a secular sense, as they’re defined as national treasures. The attempt to possess or sell moon rocks today is illegal and can earn you an arrest and either theft or fraud charges.

There seems to be no such restrictions on the Chelyabinsk Meteor, and after the space rock broke up over Russia, small pieces were gathered up and are available for private sale.

The upcoming 2014 Winter Olympics in Sochi, Russia will feature gold medals which contain fragments of the Chelyabinsk meteorite.

RussiaToday reports on the Church of the Meteorite, and the members’ plans for the future:

The biggest of the seven major chunks that the giant rock fragmented into was discovered in the local Lake Chebarkul, forming an ice-hole 8 meters in diameter. An operation to recover it from the lake began on September 10, due to be completed by September 25. The chunk is covered by about 2.5 meters of sediments and is estimated to be 30 to 100cm long, weighing about 600kg.

Breyvichko’s kindred souls regard the data stored inside the meteorite as the "testimonies", urging local authorities to give them the rock, which they want to be placed in a temple to be later built in Chelyabinsk.

"Contact with outsiders, who treat it as an average stone, can violate the information contained in it. We already see the perturbation of the noosphere from constant attempts to lift the meteorite in fomenting international instability around Syria," Breyvichko told the First Regional Channel.

There are currently about 50 believers in the Church of the Chelyabinsk Meteorite. These days they are busy holding rites on the shores of the lake, trying to protect the meteorite by building “protective barriers” around it, LifeNews.ru reported.

"I think it won’t hurt Chelyabinsk to become a truly holy city, home to a great temple that will be the object of pilgrimage for millions of people from across the world," Breyvichko stated. Source