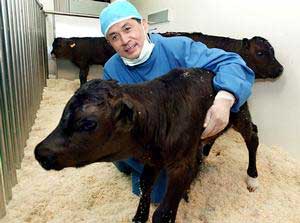 The Food and Drug Administration is expected to release a formal recommendation later this week that milk and meat from cloned animals should be allowed on grocery store shelves. The long-awaited decision comes as polling data to be released this week show that the public continues to have little appetite for such food, with many people saying the FDA should keep it off the market.

The FDA decision is based on a substantial cache of data from rigorous studies, all of which have concluded that milk and meat from cloned animals is virtually identical to such products from conventional animals. Scientists have also been unable to detect health problems in laboratory animals raised on clonal food.

By contrast, studies have found that consumers' discomfort with the idea of eating food from clones is largely based on vague emotions. Indeed, polls repeatedly have found that the public understands little about what cloning really is.

Regulators and leaders of the handful of companies poised to enter the cloned-food market say this is a chance for the government and the public to hew to the facts.

"There is no science-based reason" to withhold clone-derived meat or milk from the market or to require that they be labeled as such, FDA scientists conclude in a report in the Jan. 1 issue of the journal Theriogenology.

But others say people cannot help but be emotional about food, and those feelings deserve consideration -- if for no other reason than because ignoring them could weaken confidence in the food supply.

"There is more to this issue than just food safety," said Susan Ruland of the International Dairy Foods Association, which represents such major companies as Kraft Foods and Dannon. The organization's member companies are concerned that sales of U.S. dairy products could drop by 15 percent or more if the FDA allows the sale of meat and milk from clones.

"There's a real trust in milk as a wholesome provider of core nutrition in your diet," Ruland said. "You don't want to fool around with that." The public will be able to submit comments before a final policy is implemented.

Scientists make clones from single cells taken from animals they want to replicate. The process involves growing a cell into an embryo in a laboratory dish, then transferring the embryo to the womb of a surrogate mother animal.

Relatively few cloned farm animals exist; there are about 150 clones out of the nation's 9 million dairy cows. But biotechnology companies are gearing up to clone farmers' tastiest cattle and pigs and most productive dairy cows, a move they say will help consumers get reliably high-quality meat and milk products, day after day.