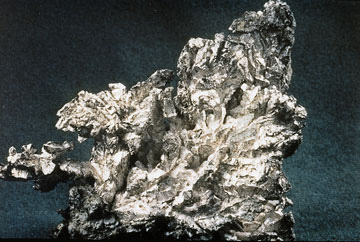 Silver has long been seen as the perfect natural antibiotic. In the old days cowboys used to fill their canteens with fresh water and then toss in a silver coin to keep that water pure in the hottest weather. Silver has been used for decades in the eyes of newborns to prevent infection. The fact is, harmful bacteria cannot survive in an environment that is rich with silver particles. That is why colloidal silver is such a powerful potion in the fight against disease.

Colloids are the smallest biological form of any matter. They are small enough to pass through membranes and therefore they skip past the digestive process and are easily absorbed by the body. The word “colloidal” means that the silver is electrically removed from its source and attached to water molecules to form a new molecule. It is however an extremely unstable molecule and must be kept in dark glass bottles, out of direct sunlight. The new molecule falls apart when stored in a plastic container.

There are many benefits of colloidal silver. Colloidal silver supports the natural defense system of the body and is powerfully alkaline. It is created when an electromagnetic process pulls tiny particles of silver from a larger sample of pure silver into (usually distilled) water. The minute electric charge on each atom holds these silver particles in suspension. This is essential to the effectiveness of the silver as it allows the particles to move more easily throughout the body.

Another benefit is that colloidal silver has been recognized as a powerful, natural antibiotic. Research has shown that it works by acting as a catalyst, disabling the enzyme that single-celled bacteria, fungi and viruses require for the metabolism of oxygen. This then suffocates the invading cell whilst doing no harm to any human enzymes, resulting in the removal of disease-causing organisms from the body.

It also works through the negative charge on the silver clusters binding up with the positive charge on the germ/bacteria. This causes an interruption of the germs biological function which means that it is then unable to reproduce.

Colloidal silver has long been the subject of hot debate in medical circles. In the 19th Century, colloidal silver was used prominently to treat all manner of illness and disease ranging from skin infections to common colds. This common use continued until 1983, when the FDA started its long and heavy oppression against the use of medicinal silver. Arguably its disdain for silver's use in medicine came from the threat that it poses to the highly lucrative antibiotics industry. Up until recently, any silver-based products had to be classified as a pre-1938 drug. However, now that the FDA has begun to approve of medicinal silver, more and more products are emerging.

There have been rumors throughout the media that colloidal silver can cause a serious side effect known as Argyria. This is a condition where the skin actually turns permanently gray. Truth is in the fact that colloidal silver is not the cause of Argyria after all. Silver nitrate and silver sulfide can both cause the condition, and silver nitrate by itself is the cause of a wide variety of illnesses in both humans and animals. In fact, the last known case of Argyria occurred back in the early 1990’s in the case of a woman who was treated with Silver Sulfadiazine therapy to help her with her varicose veins. Despite the occasional hype over colloidal silver, there is no substantiating evidence that it can cause that disease or any other for that matter. Truth be told, there are no known side effects to the use of colloidal silver whatsoever.

Colloidal silver has been reputed by various studies to be able to kill over 650 micro-organisms. It has been reported to be effective in fighting against: acne, aids, allergies, arthritis, athletes foot, boils, burns, candida, cystitis, diabetes, eczema, hay fever, indigestion, parasitic infections, psoriasis, ringworm, warts and yeast infections. It can also be used as an eye wash, to kill bacteria on the eyeball itself, topical astringent, to draw poisons from the skin, mouthwash, which, when left in the mouth for at least six minutes, kills the bacteria and germs that are present. Also, silver can be swallowed to provide daily antibacterial protection within the body. Silver is also efficient in the role of nose drops and ear drops. It is often used topically by spraying onto cuts, burns, skin infections or acne.

It can be used either orally or topically. When taken orally you can either place droplets directly under the tongue or it can be put into water and drunk.

Colloidal silver can be produced in your own home using a tiny electrical device (or a 9 volt battery and two 99.9% pure silver strips) and does not involve complicated procedures. In most cases, when purchased in a store, the same product that you can make at home yourself, can cost a small fortune and turn out to be less pure. For convenience sake however, some have found the expense is worth it in the long run.

How to Make Colloidal Silver


As of January 1, 2010, colloidal silver has officially been banned (by the EU food authorities) throughout the European Union. It can no longer be legally sold in any health food store or by any internet vendor in the EU as a nutritional supplement. There is a concerted worldwide effort to either ban colloidal silver completely, or to so heavily regulate it as a “toxin” or “pesticide” that you would need a prescription or permit to use it. Many believe this is all part of the looming one-world plot to “harmonize” all nutritional supplement laws on a global basis, and dramatically restrict your rights to use natural substances like colloidal silver as you see fit. The beneficiary of all of this Codex pseudo-science is, of course, the global pharmaceutical industry – aka Big Pharma – which has waged war for decades now against nutritional supplements in general, and colloidal silver in particular.

In the U.S., the Environmental Protection Agency (EPA) is meeting regularly to consider the fate of all silver-based products, including colloidal silver. In 2009, U.S. bureaucrats also re-categorized one of the most active forms of Vitamin B-6, pyridoxamine, as a “drug” by the FDA, even though it’s been sold as a nutritional supplement since the 1980’s. With the stroke of a pen, pyridoxamine was simply banned from ever being sold as a nutritional supplement again.