Cosmic Hand Reaches for the Light 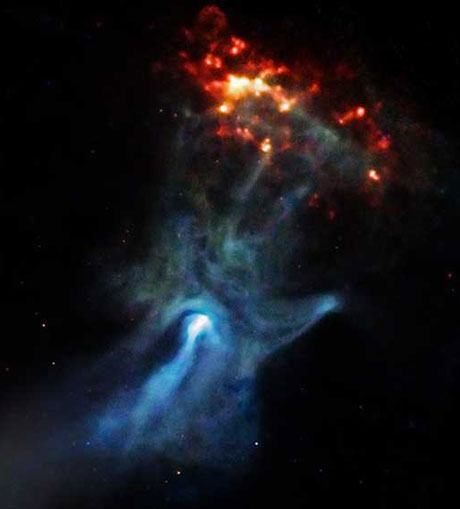 Red represents low-energy X-rays, the medium range is green, and the most energetic ones are colored blue. The blue hand-like structure was created by energy emanating from the nebula around they dying star PSR B1509-58. The red areas are from a neighboring gas cloud called RCW 89. Credit: NASA/CXC/SAO/P.Slane, et al.

Tiny and dying but still-powerful stars called pulsars spin like crazy and light up their surroundings, often with ghostly glows. So it is with PSR B1509-58, which long ago collapsed into a sphere just 12 miles in diameter after running out of fuel.

And what a strange scene this one has created.

In a new image from NASA's Chandra X-ray Observatory, high-energy X-rays emanating from the nebula around PSR B1509-58 have been colored blue to reveal a structure resembling a hand reaching for some eternal red cosmic light.

The star now spins around at the dizzying pace of seven times every second -- as pulsars do -- spewing energy into space that creates the scene.

Strong magnetic fields, 15 trillion times stronger than the Earth's magnetic field, are thought to be involved, too. The combination drives an energetic wind of electrons and ions away from the dying star. As the electrons move through the magnetized nebula, they radiate away their energy as X-rays.

The red light actually a neighboring gas cloud, RCW 89, energized into glowing by the fingers of the PSR B1509-58 nebula, astronomers believe.

The scene, which spans 150 light-years, is about 17,000 light years away, so what we see now is how it actually looked 17,000 years ago, and that light is just arriving here.

A light-year is the distance light travels in a year, about 6 trillion miles (10 trillion kilometers).