PrisonPlanetLive: "Political party leader Paul Weston was arrested by police and faces up to two years in jail for criticizing the religion of Islam during a public speech in the United Kingdom.

Weston’s arrest reveals the chilling implementation of thought crime in Britain and how political correctness is being used as a weapon with which to destroy the edifice of freedom of speech across the western world."

A candidate in the European elections was arrested on suspicion of racial harrassment after quoting a passage about Islam, written by Winston Churchill, during a campaign speech.

Paul Weston, chairman of the party Liberty GB, made the address on the steps of Winchester Guildhall, in Hampshire on Saturday.

A member of the public took offence at the quote, taken from Churchill’s The River War and called police. 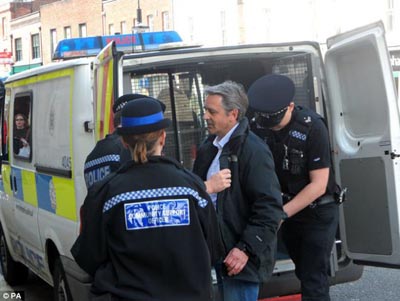 Police officers arrested Mr Weston, mid-speech, for failing to comply with their request to move on under the powers of a dispersal order made against him. He was further arrested on suspicion of religious or racial harrassment.
The passage from the book, written by the wartime Prime Minister and first published in 1899, focuses on Churchill’s observations about Islam while serving during the Anglo-Egyptian reconquest of the Sudan.

Mr Weston told his audience: ’Improvident habits, slovenly systems of agriculture, sluggish methods of commerce, and insecurity of property exist wherever the followers of the Prophet rule or live.

’Thousands become the brave and loyal soldiers of the faith: all know how to die but the influence of the religion paralyses the social development of those who follow it.

’No stronger retrograde force exists in the world. Far from being moribund, Mohammedanism is a militant and proselytizing faith.’

Police officers arrested Mr Weston, mid-speech, for failing to comply with their request to move on under the powers of a dispersal order made against him.

He was further arrested on suspicion of religious or racial harrassment.