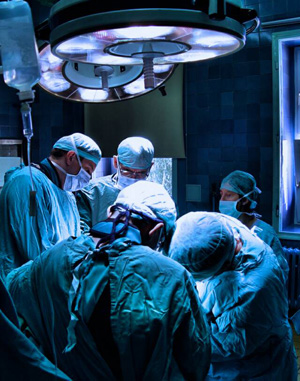 A ‘dead’ woman awoke on an operating table in America just as her organs were about to be harvested for donation.

Colleen Burns had been pronounced clinically dead by medical staff following an overdose of Xanax and Benadryl, The Post Standard newspaper reported, and after arriving at the St. Joseph’s Hospital Health Centre in Syracuse was declared a victim of “cardiac death”. Doctors had notified her family and they agreed to switch off her life support machine and donate her organs.

The 41-year-old had in-fact slipped into a deep coma as a result of her drug overdose and her condition had been mis-diagnosed as irreversible brain damage.

When Ms Burns was wheeled into surgery where her organs would be removed for transplants, her eyes opened in response to the bright lights in the operating theatre, causing doctors to immediately call off the procedure. The mother-of-three was discharged from hospital two weeks later.

According to Ms Burns mother Lucille Kuss, not only were medical staff at the hospital unaware that she was alive and demonstrating signs of brain activity, but doctors never explained exactly what had lead them to incorrectly believe her daughter had died. "They were just kind of shocked themselves," she said. "It came as a surprise to them as well."

The family did not sue and the hospital was charged just $6,000 by the State Department in September 2012. They were also ordered to hire a consulting neurologist to teach staff how to accurately diagnose brain death, as a nurse had performed a reflex test on her feet before the procedure by scraping a finger across the bottom of her foot. The toes allegedly curled downwards.

According to the paper, Dr Charles Wetli, a New Jersey based forensic pathologist said that Ms Burns reactions should have immediately suggested that she was alive and responsive. "Dead people don’t curl their toes”, he said. “And they don’t fight against the respirator and want to breathe on their own."