DECLASSIFIED: US Army’s Top Secret Arctic City Under the Ice

Nov 7, 2013 Source: forbiddenknowledgetv.com
It’s not every day the one has the opportunity to observe the construction of a secret underground base. This video is an actual declassified US Army film, documenting the nuclear-powered construction process of Camp Century, beneath the ice of central Greenland. 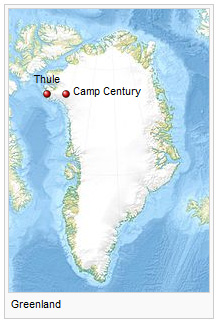 The base was constructed in the late 1950s, during the height of the Cold War, for "research" purposes.

To study the feasibility of working under the ice, a "cover" project, known as Camp Century was launched in 1960. However, unsteady ice conditions within the ice sheet caused the project to be canceled in 1966.

It eventually came out that the ultimate objective of Camp Century was of placing medium-range missiles under the ice - close enough to Moscow to strike targets within the Soviet Union. This was kept secret from the Danish government, which owns Greenland and which was legally a "nuclear free zone", in keeping with Danish policy.

Details of the missile base project were classified for decades, first coming to light in January 1997, when the Danish Foreign Policy Institute (DUPI) was asked by the Danish Parliament to research the history of nuclear weapons in Greenland during the Thulegate scandal.

A report confirmed that the U.S. stockpiled nuclear weapons in Greenland until 1965, contradicting assurances by Danish foreign minister, Niels Helveg Petersen that the weapons were in Greenland’s airspace, but never on the ground. The DUPI report also revealed details of Project Iceworm, a hitherto secret United States Army plan to store up to 600 nuclear missiles under the Greenland ice cap.

Danish workers involved in the clean-up operation claimed long-term health problems resulting from their exposure to the radiation.

Read the full article at: forbiddenknowledgetv.com

The crash-landing of an American B-52 bomber – laden with nuclear weapons – in Greenland in 1968, and the ensuing radioactive effect on local rescue teams, would have been consigned to the footnotes of history had it not been for one intrepid Aarhus radio journalist

Let me take you back to an Arctic night in January 1968, still the era of the Cold War. An American B-52 bomber gets into trouble, the crew scramble to safety and the plane comes down in Greenland with an enormous amount of weapons-grade plutonium on board. Residents of Greenland working at the American base in Thule immediately set out across the ice with husky teams to get to the downed plane – the Americans desperate to get there before anyone else.”

These were the words spoken to the European Parliament in 2007 by Diana Wallis, a British MEP. It sounds like a promising plot for an international blockbuster movie, but this largely forgotten piece of history not only had serious ramifications for the unfortunate workers commissioned to clean up the radioactive debris, but also uncovered clandestine nuclear activity on Danish soil, despite the nuclear-free zone peacetime policy announced by Denmark in 1957.

Perched right at the top of the globe, Thule Air Base has been of enormous strategic importance to the US since its construction in the early 1950s. It’s an ideal location for radar to scan the skies for any stray incoming missiles. What the Danish populace did not know or need to know at the time was that, since 1961, nuclear-armed B-52 bombers had been continuously circling Thule Air Base on routine ‘hard head’ missions, as part of a cold war strategic missile warning system. Not only that, but around 50 nuclear weapons had also been stored at the base between 1958 and 1965.

It was on one of these routine missions on 21 January 1968 that a fire broke out in the cockpit of a B-52 stratofortress. The pilot, Captain John Haug, gave the mayday signal, and the plane, loaded with four nuclear warheads, was abandoned to crash into the ice of Greenland. The husky rescue teams set off and the rest is history, although had it not been for the unrelenting detective work of Aarhus radio journalist Poul Brink almost two decades later, it would have remained in the footnotes. [...]
Source

Project Iceworm was the code name for a top secret US Army program during the Cold War to build a network of mobile nuclear missile launch sites under the Greenland ice sheet. The ultimate objective of placing medium-range missiles under the ice - close enough to Moscow to strike targets within the Soviet Union - was kept secret from the Danish government. To study the feasibility of working under the ice, a highly publicized "cover" project, known as "Camp Century" was launched in 1960. However, unsteady ice conditions within the ice sheet caused the project to be canceled in 1966.