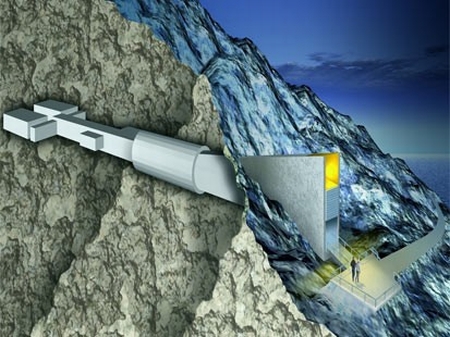 A mold-resistant bean, a German pink tomato and a wild strawberry plucked from the flanks of a Russian volcano are just some of the crops whose seeds are being tucked away this week in a giant vault dug out of a mountainside of the Norwegian island Svalbard.

With these new deposits, the so-called Svalbard "Doomsday" Global Seed Vault will reach its half-million mark of seed varieties. The giant icebox of sorts, which was officially opened on Feb. 26, 2008, is meant to protect the world’s crop diversity from natural or manmade disasters.

"Reaching the half million mark brings mixed emotions, because while it shows that the vault at Svalbard is now the gold standard for diversity, it comes at a time when our agriculture systems are really sitting on a knife’s edge," said Cary Fowler, executive director of the Global Crop Diversity Trust, which partners with the Norwegian government and the Nordic Genetic Resource Center in Sweden in operating the vault.

Fowler added, "If crops and agriculture don’t adapt to climate change, neither will humanity." 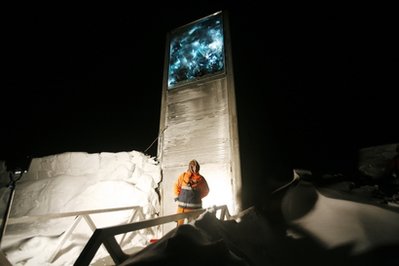 A guard armed with a rifle stands guard Sunday, Feb. 24, 2008 in Longyearbyen, Norway, outside the Svalbard Global Seed Vault, designed as a safety net for the world’s crop diversity. The vault, which has been described as Noah’s Seed Ark and a Doomsday Vault, was dug into a mountainside in Norway’s arctic Svalbard islands. It will hold 4.5 million different agricultural seed samples from around the world. (AP Photo/John McConnico)

The Vault is dug into the Platåberget mountain, which means "plateau mountain," and is located near the village of Longyearbyen, Svalbard – a group of islands north of mainland Norway. The arctic permafrost offers natural freezing for the seeds, while additional cooling brings the temperatures down to minus 0.4 degrees Fahrenheit (minus 18 degrees Celsius).

And if the mountain of snow enshrouding the storage rooms isn’t enough protection, what better body guard than one of nature’s biggest beasts.

"The region on Svalbard surrounding the Seed Vault is remote, severe, and inhabited by polar bears," according to the Global Crop Diversity Trust, which helps to support the vault’s operations.

The preciousness of such seeds is reflected in the inaccessible nature of the vault. "Anyone seeking access to the seeds themselves will have to pass through four locked doors: the heavy steel entrance doors, a second door approximately 115 meters down the tunnel and finally the two keyed air-locked doors," the Trust writes. "Keys are coded to allow access to different levels of the facility. Not all keys unlock all doors."

Seeds: not just for a rainy day

Like all seeds coming to the vault, the new ones are duplicates of those from other collections. Material directly acquired by plant breeders to develop disease-resistant and "climate-ready" crops, and to meet the challenge of rapidly growing populations, is maintained by genebanks, not the seed vault.

"Svalbard is a fail-safe backup to be used whenever a depositing seed bank loses part or all of its collection, but we should focus equally on averting the disasters in the first place," Fowler said.

Other seeds shipped to the doomsday vault include: semi-dwarf wheat and rice from the early 1960s; disease-resistant soybeans; and the German pink tomato, a hardy sweet-flavored tomato transported to Iowa in 1883 by a Bavarian immigrant.

"We’re seeing in several of the soybean varieties intriguing traits that could allow farmers to confront such problems as drought or extreme heat, shorter or longer growing seasons, or higher levels of CO2 [carbon dioxide]," said Dave Ellis, curator at the U.S. Department of Agriculture, National Center for Genetic Resources Preservation. 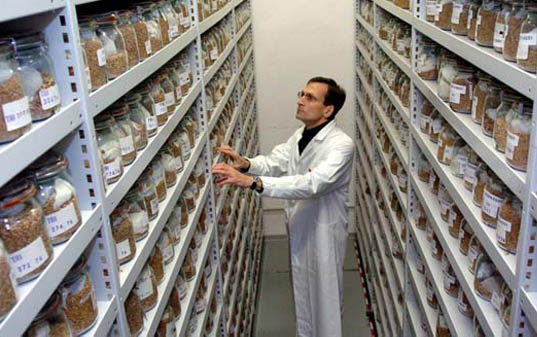