Jun 2, 2014 Source: topconservativenews.com
A major Swedish media outlet aired a documentary called “The Good Violence.” It focuses on the Marxist gang scene in Sweden know as “Antifa.” While the makers of the documentary clearly support far left politics and even justice committing felonious assaults against “neo-Nazis,” they admit that Antifa violence has gotten totally out of hand. 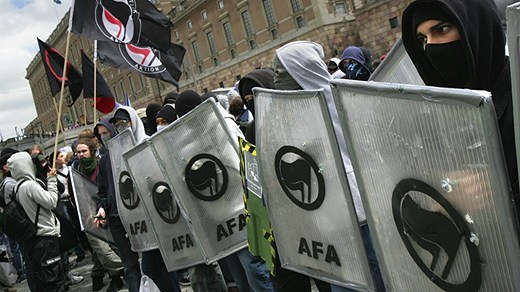 Violent “Antifa” gang in Sweden.
The documentary states that roughly 95% of politically motivated attacks in Sweden come from the left. Only about 5% come from the right.

Right-wing/Far-Right website are perhaps more popular in Sweden that any other country. Even the Swedish media admits this. However, far-left political parties still dominated Swedish politics. They wink at left-wing violence.

Note: We have similar gangs in America, they just aren’t as well known. Radical left-wing groups like the Southern Poverty Law Center [SPLC] support these violent groups. The SPLC ran a headline article on the US “Antifa” gang network in their magazine. They openly admitted the gangs engage in violence and commit mob attacks. However the SPLC described them as “A Force For Good” in a bold font sub-headline.

Article from: topconservativenews.com
Sanningen om Revolutionära Fronten
Swedish media has fooled the people to believe that the Sweden Democrats are a big threat to democracy. They constantly say that Sweden Democrats threaten our society, calling them undemocratic and violent.

Some time ago this video from the Revolutionary Front turned up. RF is an extreme organization on the far left - protected by the Swedish Church, the media, Expo (a kind of Swedish Stasi) and many more organizations.

Look at the video! These people are obviously a threat against democracy, not the Sweden Democrats they so hate. The Revolutionary Front and all those who defend them are the real threat.

But no one in mainstream media are calling these violent group dangerous. Ask yourself why.

Red Ice Radio covers more on collectivism, left and right politics, conformity, immigration, government and more of what you didn’t know about SWEDEN