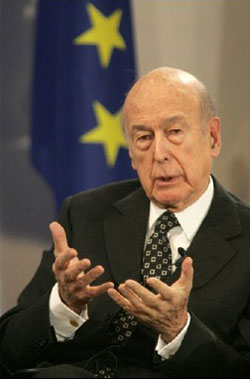 Future referendums will be ignored whether they are held in Ireland or elsewhere, Valéry Giscard d'Estaing (Knights of Malta), the architect of the European Union Constitution said.

The former President of France drafted the old Constitution that was rejected by French and Dutch voters three years ago before being resurrected as the Lisbon EU Treaty, itself shunned by the Irish two weeks ago.

Mr Giscard d'Estaing told the Irish Times that Ireland's referendum rejection would not kill the Treaty, despite a legal requirement of unanimity from all the EU's 27 member states.

"We are evolving towards majority voting because if we stay with unanimity, we will do nothing," he said.

"It is impossible to function by unanimity with 27 members. This time it's Ireland; the next time it will be somebody else."

"Ireland is one per cent of the EU".

Mr Giscard d'Estaing also admitted that, unlike his original Constitutional Treaty, the Lisbon EU Treaty had been carefully crafted to confuse the public.

"What was done in the [Lisbon] Treaty, and deliberately, was to mix everything up. If you look for the passages on institutions, they're in different places, on different pages," he said.

"Someone who wanted to understand how the thing worked could with the Constitutional Treaty, but not with this one."

France and Germany are putting pressure on Ireland to hold a second referendum which would allow the Lisbon Treaty to come into force before European elections on June 4 2009.

Mr Giscard d'Estaing believes "there is no alternative" to a second Irish vote, a view shared by Nicolas Sarkozy, the French President.

Mr Sarkozy, who takes over the EU's rotating presidency next week, will use a Brussels summit on October 15 to force Ireland to find a way out of Europe's Treaty difficulties.

"Everyone agrees it has to be sorted out by the time of European elections," he said at the weekend.

Václav Klaus, the Czech President has continued to insist that the Lisbon Treaty "cannot come into force" after the Irish vote.

"The EU cannot ignore its own rules. The Lisbon Treaty has been roundly and democratically rejected by Ireland, and it therefore cannot come into force," he told El Pais newspaper.

"Any attempt to ignore this fact and make recourse to pressure and political manipulation to move the treaty forward would have disastrous consequences."

Mark François, Conservative spokesman on Europe, also insisted that it was time that European politicians started to respect the Irish No vote.

"The Irish people gave an emphatic No to the Treaty of Lisbon on a record turnout and it would be good for politicians of all countries to respect this democratic decision," he said.

"The point is particularly clear to us here in Britain as the Irish were fortunate to be given a referendum which we were denied by our Government."

An opinion poll for the newspaper Libération has shown 44 per cent of the French want Ireland to vote again and 26 per cent want the ratification process to continue without Ireland.

But a quarter of those polled want to abandon the Treaty and 52 per cent think the Irish No vote is going to dominate Mr Sarkozy's EU presidency.