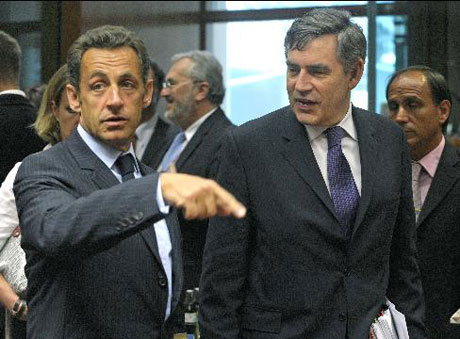 Nicolas Sarkozy, France's president, left, speaks with Gordon Brown, U.K. prime minister, before the start of the European Union's summit meeting in Brussels on Sept. 1, 2008. Photographer: Jock Fistick/Bloomberg News
European Union leaders refused to impose sanctions on Russia over the invasion of Georgia, acknowledging their reliance on Russian oil and gas at a time of faltering economic growth.

Russia is the 27-nation bloc's main supplier of oil and gas and third-biggest trading partner, giving it leverage at a time when the European economy threatens to tip into recession. Europe's determination to maintain business links also undercuts U.S. efforts to line up allies against the reassertive Russia.

"What, beyond rhetoric, do the Europeans have to offer?'' said George Friedman, chief executive of Stratfor, a geopolitical-risk analysis company in Austin, Texas. ``How do you have a diplomatic initiative with a group of Europeans whose primary goal is to avoid a confrontation?"

EU governments yesterday put the trade talks, under way since June, on hold until Russia makes good on pledges to end the military occupation of parts of Georgia.

"We unambiguously condemn Russia's disproportionate reaction, and we are conscious of our responsibility to maintain dialogue with our Russian neighbors," French President Nicolas Sarkozy told a news conference yesterday after chairing an EU summit in Brussels.

Backed by U.K. Prime Minister Gordon Brown, eastern European governments overcame initial resistance by France and Germany to freezing the talks, launched after 18 months of inner-EU wrangling over what kind of deal to seek from Russia.

Unity
"You have an EU of 27 members showing unity of purpose," Brown said.

Stopping the negotiations might work to Russia's advantage, enabling Moscow to play European governments off against each other in energy and business dealings.

"I am not inclined to overdramatize the results of the summit," Vladimir Chizhov, Russian ambassador to the EU, told Interfax. "But if they want to re-evaluate relations with Russia, then we'd have to do that as well."

The EU said it is counting on diplomatic isolation to force Russia to pull troops back from Georgian territory and prevent the Moscow leadership from bullying other ex-Soviet republics such as Ukraine.

"I'm against any kind of escalation," Austrian Chancellor Alfred Gusenbauer said. Russia and Europe have "strategic reasons for reasonable cooperation."

Cease-Fire
Sarkozy, holder of the EU's six-month presidency, will lead an EU delegation to Moscow on Sept. 8 to demand that Russia pull back behind the pre-war lines. He defended the cease-fire that he brokered, which was criticized for vague language that allowed the Russian army to remain on Georgian soil. Russia calls its troops in Georgia "peacekeepers" and says they are in a buffer zone allowed by the cease-fire.

Russia went on to recognize the independence of South Ossetia and Abkhazia, another breakaway Georgian republic. The EU condemned the attempt to dismember Georgia and urged the rest of the world not to recognize the two separatist regions.

Opposition to the scaling back of economic ties is widely shared across the western European countries at the heart of the EU, led by Germany, the country with the deepest business connections to Russia.

Europe's weak hand in confronting Russia "could lead to a trans-Atlantic rift, but it would be a pointless rift because both sides are equally powerless," Jan Techau, an EU and security expert at the German Council on Foreign Relations in Berlin, said in an interview.

Growing Clout
In a sign of their growing clout within the EU, eastern European countries once under the Soviet yoke pushed through a harder line. Some 53 percent of Poles favor imposing sanctions on Russia, with only 30 percent against, according to an Aug. 30 survey published today in the Dziennik newspaper.

The EU toughened up its declaration yesterday in a way that "definitely moved toward Poland's position," Polish President Lech Kaczynski said. The EU eyed a Nov. 14 summit with Russia as a deadline for Russian leaders to recommit to good neighborly relations.

Still, no government leader called openly for sanctions against Russia, a sign of Europe's addiction to Russian energy. Russia delivers over 40 percent of Europe's gas imports, a figure that will rise to 60 percent in 2030, the European Commission says. A third of Europe's imported oil now comes from Russia.

Energy Markets
"Russians need our energy markets and we need Russian energy -- it's as simple as that," Finnish Foreign Minister Alexander Stubb said in a Bloomberg Television interview.

Russia said it won't let up until Georgia ousts its president, Mikheil Saakashvili, who has sought closer ties with the U.S. and is bidding for Georgia to join the North Atlantic Treaty Organization.

U.S. Vice President Dick Cheney departs today for Azerbaijan and Georgia, which are crucial to the westward flow of energy via a corridor that bypasses Russia. He also will stop in Ukraine, whose desire to join NATO is opposed by Russia.

Indicating that regime change in Georgia is the ultimate goal, Foreign Minister Sergei Lavrov called on Russian television for an arms embargo on "this regime until a different authority turns Georgia into a normal state."

EU leaders pledged to help repair the damage to Georgia's infrastructure, plus more humanitarian aid on top of at least 14 million euros ($20 million) delivered already. The EU will also organize a donors' conference.

The bloc also promised to establish a free-trade zone with Georgia and to make it easier for Georgian citizens to travel to Europe. It didn't set a timetable.