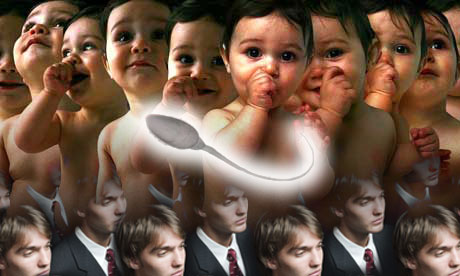 British scientists claim a first in medical history by using embryonic stem cells to create human sperm in a laboratory. Researchers at Newcastle Uni hope it will help infertile couples but it has sparked an ethical debate. Sky's Gerard Tubb reports.

In a world first, British scientists have grown human sperm in the laboratory.

The breakthrough in stem cell science offers a potential cure for male infertility and could be used in IVF clinics in as little as five years.

It would allow thousands of men to father children that are genetically their own, possibly from just a sliver of their skin.

But the cutting-edge work is fraught with medical and ethical problems.

It raises the possibility of babies being born entirely through artificial means, and even the macabre scenario of long-dead men 'fathering' children from beyond the grave.

The Newcastle University work centres on stem cells - 'blank' cells with the ability to turn into other cell types.

Viewed through a microscope, they have heads and tails and swim like normal sperm, and Professor Nayernia is 'convinced' they would be capable of fertilising eggs and creating babies.

He has more safety checks to carry out but plans to apply for permission to use some of the artificial sperm to fertilise eggs for research purposes.

The stem cells used were taken from embryos in the first days of life but the professor hopes to repeat his success with skin cells taken from a man's arm. These would first be exposed to a mixture that wound back their biological clocks to embryonic stem cell state, before being transformed into sperm.

Using IVF techniques, the artificial sperm could be injected into eggs, allowing men who do not produce sperm to father children of their own.

However, British law forbids the use of lab-grown sperm or eggs in fertility treatment - a situation the researchers believe needs to change.

Lab-grown sperm could also shed light on the causes of infertility, leading to new treatments for the heartbreaking but little-understood condition that affects one in six couples.

Identification of a flaw in the sperm-making process could lead to the creation of a 'miracle pill' to boost fertility.

Professor Nayernia said: 'This is an important development as it will allow researchers to study in detail how sperm forms and lead to a better understanding of infertility in men - why it happens and what is causing it.

Male infertility is a growing problem and no one knows why. We'll be able to study the effects of pollution and nutrition in the lab.'

But the researcher also acknowledged that the technique could potentially be applied to skin cells taken from men who have been dead for many years, allowing them to 'father' children.

He said: 'This is the Jurassic Park scenario. In theory this would be possible but human reproduction is not a purely biological process. We have to think of the psychological, social and ethical considerations.'

The Newcastle team tried to create sperm from stem cells from female embryos but failed - suggesting that men will always have an important role in the creation of life.

But, in time, it may be possible to create eggs from a woman's stem cells, raising the possibility of artificial eggs and sperm being combined to create children through entirely artificial means.

Rival stem cell experts questioned whether the professor had created fully-functioning sperm and warned that similar experiments on mice had led to the birth of young with a host of health problems.

Opponents said it was wrong to meddle with the creation of human life. Josephine Quintavalle, of campaign group Comment on Reproductive Ethics, said: 'To take a viable human embryo and destroy it in a bid to create dodgy sperm to create a not-so-healthy embryo is experimentation for experimentation's sake.

'Infertility is an issue we have to address but this is not an ethical solution. If the solution involves the sacrifice of human life, then it should be apparent to anyone that it is unacceptable.'

Dr Trevor Stammers, a GP and lecturer in healthcare ethics, warned that the technology could be 'used and abused' to create children who did not know who their father was.

And he said there were easier ways of tackling fertility problems.

He said: 'Obviously there are men who through no bad habits or indulgences find themselves with a fertility problem but alcohol, smoking and drug misuse don't help.

'Alcohol alone is a huge cause of infertility in men.'