May 12, 2011 Source: independent.ie
"End is in sight for roll calls as schools face the future"

An Irish software firm has brought the traditional school attendance register into the computer age.

Two schools have already adopted the latest face-recognition technology to monitor attendance and timekeeping among thousands of pupils, and other schools are planning to introduce the system from September.

Students simply look at a device when they arrive at school and, within seconds, they are scanned, identified and their attendance is registered. 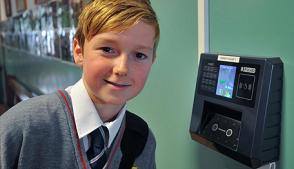 Conor Kavanagh, a first-year pupil at Templeogue College, Dublin, next to the new system.

It saves hours of teachers’ time recording attendance and ’lates’, and provides an at-a-glance record of who’s in and who’s out.

It also makes it easy to track poor attendance or lateness patterns, which would allow for early intervention to nip a problem in the bud.

And it overcomes the so-called ’buddy punching’ problem, where a student can make a false registration by swiping in someone else’s card.

Templeogue College in south Dublin has become the first school here to use the system to track attendance and timekeeping among its 700 pupils.

It has also been installed in Ardscoil Ris, Limerick, in recent weeks and a number of other schools are planning to use it from September.

The Anseo Enterprise system has been created by the Co Kerry software company, Ivertec, specialising in educational products and costs an average of about €15 per pupil.

Face-recognition software is now widely used as an ID system, but this is the first time it has been adopted by schools in this country.

A student is required to do little beyond perhaps pulling back a long fringe so the scanner gets a clear view of the face.

Templeogue principal Aoife O’Donnell said they wanted an accurate and efficient system to replace the time-consuming tradition of rolls.

They were investigating systems such as swipe cards when they learned of the face-recognition software, which eliminates the issue of lost or forgotten cards.

She said parents have been generally supportive.

"Within five minutes of school starting, we know exactly who is in the building and if students come in late, it will show up," Ms O’Donnell said.

It is too early to say what impact the system will have on attendance and timekeeping, but when fully operational she said it would allow them to build up attendance profiles.

Ms O’Donnell added that, in an era of cutbacks, staff time was much better employed in teaching rather than in checking and recording attendance manually across a minimum of 24 classes every day.

Sixth-year student Luke O’Callaghan-White (17), said there were a few ’Big Brother’-style jokes initially, but that had all passed. He said the system was "straightforward, efficient and preferable to a year head interrupting the first class for five minutes" to take a roll.

Ed Note: In an era of major data piracy and identity theft, (as well as online stalking) is it wise to allow your children to have their facial information, as well as other personal identification data, to be stored in a system database? This not only reveals who they are, and what they look like, but what school they attend and the child’s location during the day.