A few months ago we highlighted the story of the controversial statue being planned by the Satanic Temple for proposed placement at the Oklahoma Statehouse.

After raising funds to cover the project, the group has now commissioned the creation of the statue, and it’s well on its way to bronzing. The first look at the statue is being met with reactions across the board, ranging between delight and humor, to concern and condemnation.

The issue has raised questions about religion, the occult, politics, history and rights in the United States.

Click here to read more on the inception of the statue, Baphomet, and Satanism. 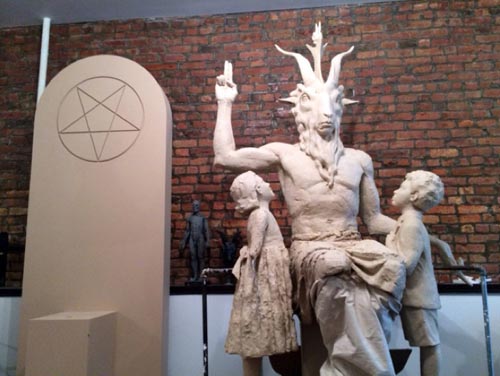 In January the Satanic Temple announced plans to erect a monument glorifying the Dark Lord on the front lawn of the Oklahoma Statehouse.

An Indiegogo campaign was launched with what seemed like a somewhat lofty goal of $20,000, but by the time donations ended almost $30,000 had been raised. Now an artist trained in classical sculpture is toiling away in New York, crafting a Baphomet figure sitting beneath an inverted pentagram and flanked by two children gazing upward in loyalty. When it is finished, it will be cast in bronze and, the Satanists hope, eventually displayed in Oklahoma.

The statue is a direct response to the state’s installation of a Ten Commandments monument outside the Capitol in 2012. State Representative Mike Ritze paid for the controversial statue with his own money, and therefore it was considered a donation and OK to place on government property. Following that line of reasoning, the Satanic Temple submitted a formal application for their monument.

As Trait Thompson of the Oklahoma Capitol Preservation Commission told CNN last December, “Individuals and groups are free to apply to place a monument or statue or artwork.” The applications are then approved or rejected by the Commission. Unfortunately, the state has placed a halt on issuing permits for any other monuments until a lawsuit filed by the ACLU against Ritze’s Commandments monument is settled.

Nonetheless, the Satanists are building this thing, and I was offered an early peek at the work in progress by Temple spokesperson Lucien Greaves. Greaves told me he has received numerous threats from people who want to attack the sculpture, but that he “wouldn’t expect these outraged and nearly insensible reactionaries to actually know how to assault a bronze monument without severely hurting themselves in the process.” Still, he’s not taking any chances. The Temple is building a mold of the sculpture so they can pop these things out like evil, terribly expensive action figures whenever they need a new one.

“Depending on our insurance policy,” Greaves said, “we may be able to cast two from the destruction of one, expediting our arrival to the next battleground.”

The Temple estimates that the monument will be finished in a few months. Once it’s done, they plan to put it in front of the Oklahoma Statehouse regardless of the the Capitol Preservation Commission’s ongoing battle against the ACLU. They feel this should be allowed because their application was submitted before all the hullabaloo over Ritze’s monument.

Read the full article at and see more photos at : vice.com
Tune into Red Ice Radio:

Robert A. Anderson - The Church of God or the Temples of Satan?