May 10, 2010 Source: youtube.com
"Former 9/11 Commissioner, Tim Roemer, slips up in a CNN interview and says a missile caused the damage to the pentagon and then quickly corrects himself to line up with the official story of an airplane hitting the building. " 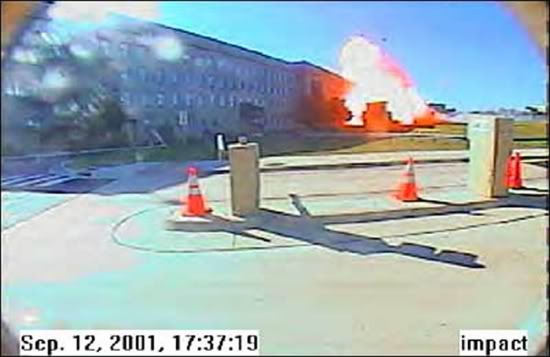 Since their release on March 7th 2002 (a few days after the publication of Thierry Meyssan’s l’Effroyable Imposture, the first book seriously to question the official version of events) the five frames of security camera footage purporting to show the Pentagon attack have aroused a great deal of controversy. Even the circumstances surrounding their arrival in the public domain is surrounded by mystery. It appears they were not officially released by the Pentagon at all but were ’leaked’ by person or persons unknown. Rather than remaining tight-lipped on the subject and conducting an internal inquiry into this distressing lapse in security, the Pentagon instead cheerfully and immediately confirmed that the frames in question were genuine and left it at that. For the more cynical among us, this is already enough to set the alarm bells ringing. It sounds like a good way of circulating some strategic misinformation while at the same time side-stepping the issue of why the Pentagon did not release the video footage in its entirety. Source