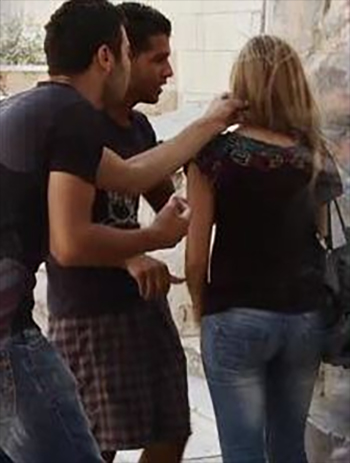 Germany in a state of SIEGE: Merkel was cheered when she opened the floodgates to migrants. Now, with gangs of men roaming the streets and young German women being told to cover up, the mood’s changing.

On the busy shopping street in Giessen, a German university town twinned with Winchester, migrant Atif Zahoor tucks into a chicken dish with his brother and cousin at the curry restaurant Chillie To Go.

They have left good jobs back in Karachi, Pakistan, and now want to be Europeans.

In late July the three slipped into Germany with their wives and children, using illegal documents. They live together in a five-bedroom house, rented for them by Chancellor Angela Merkel’s government, a 40-minute drive away from Giessen, which is home to the biggest migrants’ camp in the country.

‘We paid a trafficking agent for false visas to fly here to Germany,’ says 34-year-old Atif. ‘We claimed asylum and came to Giessen camp with other migrants. Three weeks ago, because we had families, they gave us a proper home.’

Atif is well-dressed and speaks perfect English. He used to be a transport manager at Karachi airport and is from a well-to-do family. Between mouthfuls of curry, he adds: ‘But there is violence between political gangs in Karachi. Lots of people are leaving for Europe. The trafficker decided that Germany was the place for us because it is welcoming refugees.’

Yet the raw truth is that Atif is not fleeing war or persecution. He is one of thousands of economic migrants getting into Germany as the EU’s immigration crisis grows bigger each day.

This week, David Cameron said Europe must send failed asylum claimants back to their own countries, while European Council president Donald Tusk has warned that millions more migrants are on their way and ‘the policy of open doors and windows’ must be scrapped.

They are tough words, but it’s action that is needed. As Jens Spahn, a deputy finance minister in Chancellor Merkel’s government, said this week: ‘Not everyone can stay in Germany, or in Europe. If people are coming for poverty reasons… we have to send them back.’

Mrs Merkel’s offer last month to accept all refugees from war-ravaged Syria opened the floodgates. More than a million migrants are expected this year alone, the bulk of them far from genuine asylum seekers. There is now deepening disquiet in this Christian country, dotted with churches, that it is being overwhelmed by people of a different religion and culture.

Yesterday, the Mail reported how social workers and women’s groups in Giessen wrote a letter to the local state parliament claiming that rape and child abuse were rife in the refugee camp. The allegations were corroborated by Atif over his curry. ‘The camp is dangerous,’ he agreed. ‘Men of different nationalities fight and women are attacked.’

The letter says the camp, far from being a peaceful haven for those fleeing war, is a dangerous melting-pot, where there have been ‘numerous rapes and sexual assaults, and forced prostitution’.

There are even reports of children being raped and subjected to sexual assault, it adds.