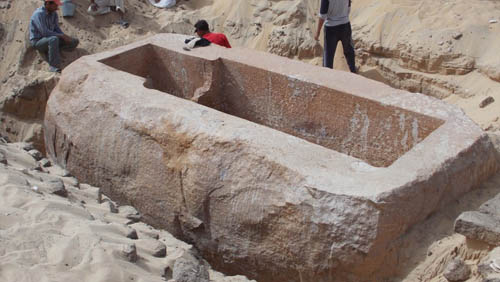 Archaeologists working at the southern Egyptian site of Abydos have discovered the tomb of a previously unknown pharaoh: Woseribre Senebkay—and the first material proof of a forgotten Abydos Dynasty, ca. 1650–1600 BC.

Working in cooperation with Egypt’s Supreme Council of Antiquities, a team from the Penn Museum, University of Pennsylvania, discovered king Senebkay’s tomb close to a larger royal tomb, recently identified as belonging to a king Sobekhotep (probably Sobekhotep I, ca. 1780 BC) of the 13th Dynasty.

The discovery of pharaoh Senebkay’s tomb is the culmination of work that began during the summer of 2013 when the Penn Museum team, led by Dr. Josef Wegner, Egyptian Section Associate Curator of the Penn Museum, discovered a huge 60-ton royal sarcophagus chamber at South Abydos. The sarcophagus chamber, of red quartzite quarried and transported to Abydos from Gebel Ahmar (near modern Cairo), could be dated to the late Middle Kingdom, but its owner remained unidentified. Mysteriously, the sarcophagus had been extracted from its original tomb and reused in a later tomb—but the original royal owner remained unknown when the summer season ended.

In the last few weeks of excavations, fascinating details of a series of kings’ tombs and a lost dynasty at Abydos have emerged. Archaeologists now know that the giant quartzite sarcophagus chamber derives from a royal tomb built originally for a pharaoh Sobekhotep—probably Sobekhotep I, the first king of Egypt’s 13th Dynasty. Fragments of that king’s funerary stela were found just recently in front of his huge, badly robbed tomb. A group of later pharaohs (reigning about a century and a half later during Egypt’s Second Intermediate Period) were reusing elements from Sobekhotep’s tomb for building and equipping their own tombs. One of these kings (whose name is still unknown) had extracted and reused the quartzite sarcophagus chamber. Another king’s tomb found just last week is that of the previously unknown pharaoh: Woseribre-Senebkay.

A Lost Pharaoh and a Forgotten Dynasty

The newly discovered tomb of pharaoh Senebkay dates to ca. 1650 BC during Egypt’s Second Intermediate Period. The identification was made by Dr. Wegner and Kevin Cahail, Ph.D. student, Department of Near Eastern Languages and Civilizations, University of Pennsylvania. The tomb of Senebkay consists of four chambers with a decorated limestone burial chamber. The burial chamber is painted with images of the goddesses Nut, Nephthys, Selket, and Isis flanking the king’s canopic shrine. Other texts name the sons of Horus and record the king’s titulary and identify him as the “king of Upper and Lower Egypt, Woseribre, the son of Re, Senebkay.” 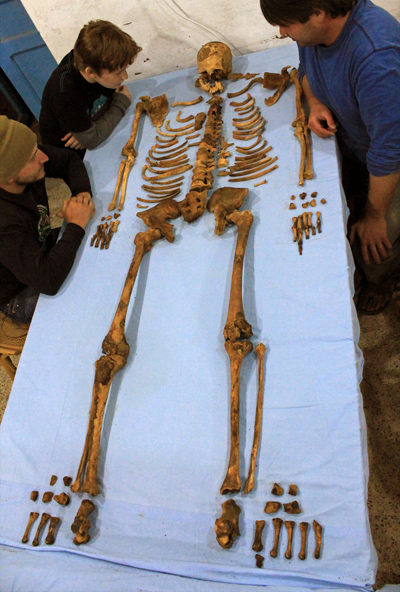 The skeleton of the previously unknown pharaoh Woseribre Senebkay lays on a table. The king’s body was originally mummified, but robbers ripped the body apart.

Read the full article and see photos at: heritagedaily.com