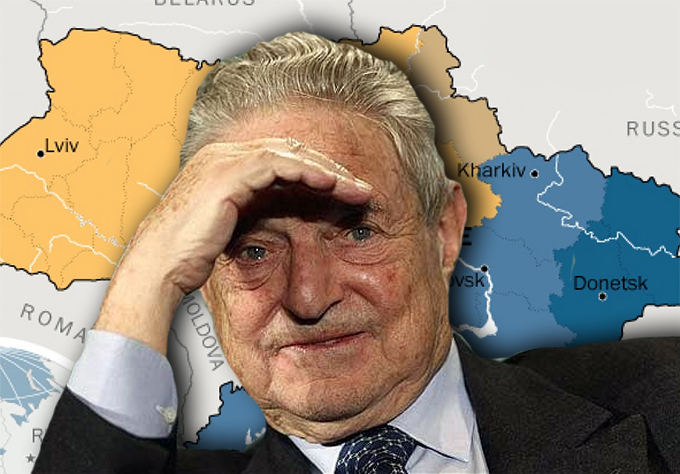 Just days after George Soros warned that World War 3 was imminent unless Washington backed down to China on IMF currency basket inclusion, the hacker collective CyberBerkut has exposed the billionaire as the real puppet-master behind the scenes in Ukraine. In 3 stunning documents, allegedly hacked from email correspondence between the hedge fund manager and Ukraine President Poroshenko, Soros lays out "A short and medium term comprehensive strategy for the new Ukraine," expresses his confidence that the US should provide Ukraine with lethal military assistance, “with same level of sophistication in defense weapons to match the level of opposing force," and finally explained Poroshenko's "first priority must be to regain control of financial markets," which he assures the President could be helped by The Fed adding "I am ready to call Jack Lew of the US Treasury to sound him out about the swap agreement."

The hacking group CyberBerkut claims it has penetrated Ukraine’s presidential administration website and obtained correspondence between Soros and Ukraine’s President Petro Poroshenko. It has subsequently posted all the intercepted pdfs on line at the following location. More details as RT earlier reported:

The hacktivists have published three files online, which include a draft of “A short and medium term comprehensive strategy for the new Ukraine” by Soros (dated March 12, 2015); an undated paper on military assistance to Kiev; and the billionaire’s letter to Poroshenko and Ukraine’s Prime Minister Arseny Yatsenyuk, dated December 23, 2014.

According to the leaked documents, Soros supports Barack Obama’s stance on Ukraine, but believes that the US should do even more.

He is confident that the US should provide Ukraine with lethal military assistance, “with same level of sophistication in defense weapons to match the level of opposing force.”

“In poker terms, the US will ‘meet, but not raise,” the 84-year-old businessman explained, supposedly signing one of the letters as “a self-appointed advocate of the new Ukraine.”

The Western backers want Kiev to “restore the fighting capacity of Ukraine without violating the Minsk agreement,” Soros wrote.

Among other things, the leaked documents claim that the Ukrainian authorities were also asked to “restore some semblance of currency stability and functioning banking system” and “maintain unity among the various branches of government” in order to receive assistance from foreign allies.

Soros believes that it’s up to the EU to support Kiev with financial aid, stressing that “Europe must reach a new framework agreement that will allow the European Commission to allocate up to $1 billion annually to Ukraine.”

As for the current state of economy, the billionaire wrote that former Chilean finance minister, Andres Velasco, after visiting Ukraine on his request, returned with “a dire view of financial situation."

“The new Ukraine is literally on the verge of collapse” due to the national bank’s lack of hard currency reserves, Soros warned Poroshenko.

The correspondence shows that the billionaire has been in constant touch with the authorities in Kiev and consulting them.

Digging into the details of the documents, we find one intriguing snippet:

As you know, I asked Andrés Velasco, a prominent economist who was Chile’s very successful minister of finance from 2006-2010 to visit Kyiv where he met the Prime Minister; the President was in Warsaw at the time. Velasco came back with a dire view of the financial situation. The National Bank of Ukraine has practically no hard currency reserves. That means that the hryvnia has no anchor. If a panic occurred and the currency collapsed as it did in Russia, the National Bank could not stabilize the exchange rate even if only temporarily as Russia did by injecting $90 billion.

Your first priority must be to regain control over the financial markets—bank deposits and exchange rates. Unless you do, you will have no way to embark on deeper reforms. I believe the situation could be stabilized by getting the European Council to make a commitment in principle that they will pull together the new $15 billion package that the IMF requires in order to release the next tranche of its original package at the end of January 2015. Based on that commitment the Federal Reserve could be asked to extend a $15 billion three months swap arrangement with the National Bank of Ukraine. That would reassure the markets and avoid a panic.

I am ready to call Jack Lew of the US Treasury to sound him out about the swap agreement.

One wonders what other matters of national importance involve George Soros getting on the line with the US Treasury Secretary to arrange virtually unlimited funds courtesy of the US Federal Reserve just to promote one person's ulterior agenda?

And just like that, conspiracy Theory becomes Conspiracy Fact once again.

The full documents are below:

Ironically, the first document laying out the "short and medium-term comprehensive strategy for new Ukraine" and signed by George Soros, "a self-appointed advocate of the New Ukraine", was ironically created by Tamiko Bolton, the 40 year old who became Soros' third wife several years ago.