Hitler was a Godsend for Israel 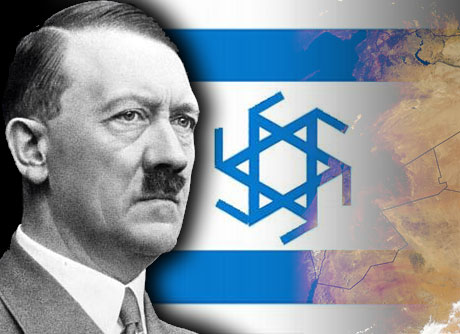 Judea Declares War on Germany: A Critical Look at the Holocaust and WWII

If Hitler didn't exist, the Zionists would have had to create him. Maybe they did. 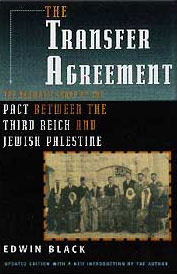 The vast majority of German Jews "vehemently rejected Zionism as an enemy from within." Eighty thousand had fought in the trenches and 12,000 had died. "Nowhere was the opposition of Jews [to Zionism] so widespread, principled, and fierce as in Germany," a Zionist historian wrote. (168)

Thanks to Hitler, 60,000 German Jews emigrated to Israel between 1933 and 1941. Thanks to a "Transfer Agreement" between Nazis and Zionists, Jewish property valued at $100 million was transferred to Israel in the form of German industrial exports used to build Israel's infrastructure.

This at a time when there were only 200,000 Jews in Palestine, many anti- Zionist religious Jews. The daily wage of a Jewish worker in Palestine was $1 a day.

In 1937, when the British proposed dividing Palestine into two states, the Nazis wondered if they hadn't made a mistake by creating "a Jewish Vatican" dedicated to Germany's demise. But Hitler overruled all dissenters and insisted the Transfer Agreement be continued and even expanded to other countries. (376)

Hitler hated Jews so much he built a country for them. He could have taken all their property and kicked them out but that would have been anti-Semitic.

What did he get out of it? Well the Zionists actually expanded Nazi trade by reselling German goods throughout the Middle East. Yes, they didn't just trade with the Nazis, they acted as their agents. The Nazis also got a lot of Jaffa oranges and got rid of a lot of Jews.

The World Jewish Congress had to act pretty offended because they had a world boycott of Germany goods. But this only endeared the doughty Zionists to the Nazis. And gave the Nazis an excuse to boycott and persecute German Jews.

Zionist-Nazi Cooperation
As soon as the Nazis assumed power in 1933, the Zionists gained a visibly protected political status. After the Reichstag fire, the Nazis crushed virtually all political opposition and closed 600 newspapers. But not the Zionists nor their newspaper which was hawked from every street corner, and saw its circulation multiply five times to 38,000. Zionism was "the only separate political philosophy sanctioned by the Third Reich." (174)

The Zionist uniform was the only non-Nazi uniform allowed in Germany. Same with their flag. Hebrew was mandated in Jewish schools. Still German Jews wanted to stay in Germany "even as second class citizens, even reviled and persecuted." (175) But the Zionists scorned the German Jews saying they deserved to be persecuted for wanting to assimilate.

Zionists pandered to the Nazis comparing their racial ideologies: "a common fate and tribal consciousness must be of of decisive importance in developing a lifestyle for Jews too." (175)

This explains how " a fringe minority of German Jews took emergency custody of 550,000 men, women and children..." Black says. This was confirmation "of what Diaspora Jews had always feared about Zionism--it would be used as the legal and moral pretext for forcing Jews out of European society." (177)

It explains also why Israel behaves like Nazi Germany. They have a common racist pedigree. Not only did the Nazis build Israel, but Israel built Nazi Germany by providing an export market. They worked together. Many Jews didn't get all their money when they arrived in Israel. Thus, the Zionists participated directly in the looting of Europe's Jews which was called "Aryanization."

Conclusion
Increasingly Israelis, and Jews in general, are realizing that Zionism is a ruse and Israel's behavior bears an uncany resemblance to Nazi Germany's. For example, Israeli academic Yeshayahu Leibowitz says everything Israel has done since 1967 is "either evil stupidity or stupid evil." He refers to the Israeli army as "Judeo-Nazi." 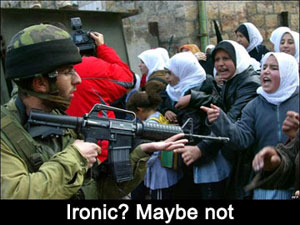 This is not the place to show how Hitler was put into power by Anglo-American (i.e. Illuminati and Jewish) finance, the same people who created Communism and Zionism. But it is the place for Jews and Americans to consider this lesson. Events are created in order to brainwash and manipulate people to advance the agenda of the New World Order.

Jews were uprooted. massacred and robbed in order to build the capital of Rothschild world government in Israel. Americans are dying in Iraq and Afghanistan and some day Iran to stamp out Islam. Economic turmoil is making desperate people embrace world government socialism. And so on...