The commander of the International Space Station, Daniel Burbank, shook hands Wednesday with Robonaut. It’s the first handshake ever between a human and a humanoid in space.

NASA’s Robonaut was launched aboard space shuttle Discovery last February. Crews have been testing it to see how it one day might help astronauts perform space station chores.

On Wednesday, ground controllers activated computer software that enabled the robot to extend its right hand, fingers outstretched. Burbank took the mechanical hand and pumped it up and down, as the robot’s fingers tightened around his hand.

A cheer went up in the control room in Huntsville, Ala. 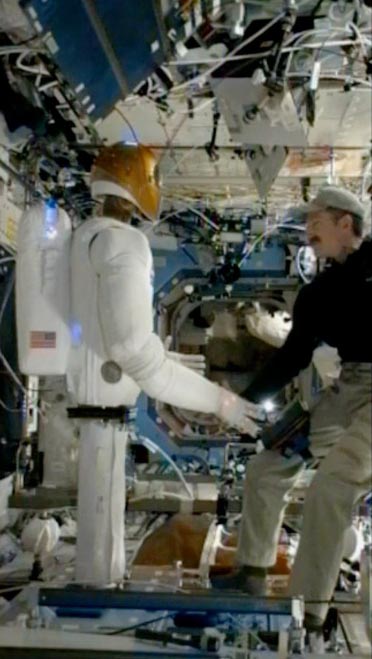 The commander of the International Space Station, Daniel Burbank, shakes hands with Robonaut aboard the station in orbit around the earth. It’s the first handshake ever between a human and a humanoid in space. Source

"For the record, it was a firm handshake," Burbank radioed. "Quite an impressive robot."

Robonaut - the first humanoid in space, built from the waist up - said via Twitter that it was an awesome experience, then followed up with some sign language.

"The handshake was definitely one of the highlights of the day, but I’m not done yet," Robonaut said in a tweet. (A NASA spokeswoman actually files the tweets under the handle AstroRobonaut.)

"Did you catch that? I don’t have a voice, but I sent you a message -- Hello world ... in sign language!" Robonaut tweeted. "What a day! I passed my tests with flying colors!!!" 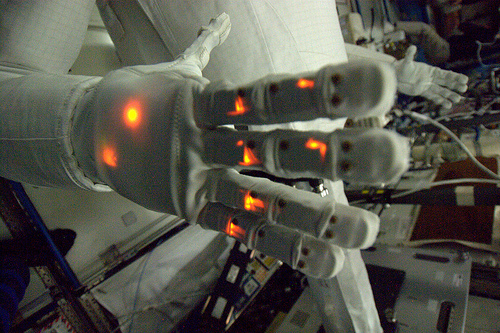 HAL was the conspiring computer in "2001: A Space Odyssey." The people-hating artificial intelligence system Skynet is from the "Terminator" films, while Cylons are cyber-warriors from "Battleship Gallactica."

Robonaut spends most of its time in hibernation aboard the space station. The astronauts bring the humanoid out every so often for testing; it was awakened in space last August and made its first motion in October. A future model could venture outside for spacewalks, saving its human companions time and keeping them safe.