Jul 27, 2009 Source: news.nationalgeographic.com
A Neanderthal man who lived as recently as 50,000 years ago may have been killed by a modern human armed with an advanced projectile weapon, a new study suggests.

If confirmed, the Paleolithic "murder" would be the first compelling case for an anatomically modern human using a weapon against a member of the extinct human species. 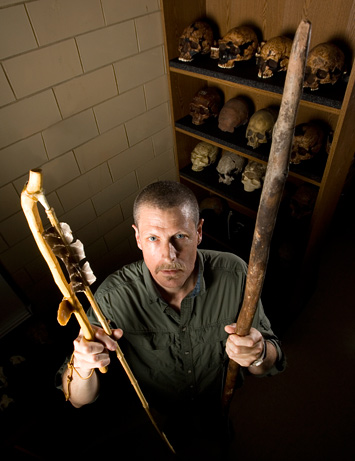 The Neanderthal, dubbed Shanidar 3, was discovered in an Iraqi cave in 1959. His remains show that he likely died of a clean wound to his left side that nicked one rib but left the others relatively unharmed.

"People have been speculating about this injury for about 50 years," said study leader Steven Churchill of Duke University in North Carolina.

Experts have suggested that the Neanderthal may have fallen on his own spear, been fatally poked by a fellow hunter—or been killed by a projectile weapon, which only modern humans were known to use.

To test these theories, Churchill and his team used a crossbow that could be calibrated to create different kinds of injuries in pig carcasses, which have body structures similar to humans'.

The team then examined the wounds created by the equivalent of a thrusted spear and one thrown from a distance using an ancient projectile weapon.

"When we replicated the lower energies involved with projectile weapons, we tended to get the nice clean incisions that we see in Shanidar," Churchill explained.

By contrast, "injuries caused by a thrusting spear usually involved at least two ribs, and there was massive collateral damage."

Also, whatever nicked the Neanderthal's rib entered the body at a 45-degree downward angle, which is consistent with the curved "ballistic trajectory" of a thrown weapon, Churchill said.

Shanidar 3 is one of only two known Neanderthal skeletons bearing evidence of a weapons-related death.

The other remains, found in France, date back to around 36,000 years ago and show a skull injury caused by a stone tool. But it's less clear whether the weapon that caused the blow was a thrown projectile, Churchill said.

Better dating of Shanidar 3's remains could further bolster that case for an interspecies murder.

Age estimates for the Neanderthal's remains range from 50,000 to 75,000 years ago. Modern humans are thought to have spread from Africa into what is now Iraq around 50,000 years ago.

"If Shanidar 3 is as young as 50,000 years old," Churchill said, "he's in the right time period" to have had contact with modern humans.

Findings appear in an upcoming issue of the Journal of Human Evolution.