Hypercleanliness is making us sick - Children develop allergies and eczema 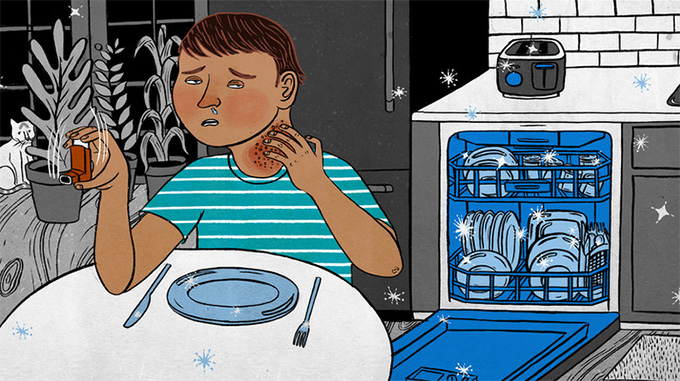 Could using a dishwashing machine increase the chances your child will develop allergies? That's what some provocative new research suggests — but don't tear out your machine just yet.

"I think it is very interesting that with a very common lifestyle factor like dishwashing, we could see effects on allergy development," says Dr. Bill Hesselmar of Sweden's University of Gothenburg, who led the study.

The findings are the latest to support the "hygiene hypothesis," a still-evolving proposition that's been gaining momentum in recent years. The hypothesis basically suggests that people in developed countries are growing up way too clean because of a variety of trends, including the use of hand sanitizers and detergents, and spending too little time around animals.

As a result, children don't tend to be exposed to as many bacteria and other microorganisms, and maybe that deprives their immune system of the chance to be trained to recognize microbial friend from foe.

Related: Are chemicals necessary in grooming and household products? Absolutely not!

That may make the immune system more likely to misfire and overreact in a way that leads to allergies, eczema and asthma, Hesselmar says.

He and his colleagues have been trying to figure out some of the simple day-to-day ways we might be too clean. A previous study examined how parents cleaned off their children's pacifiers. In their latest research, the researchers took a look at how people wash their dishes.

"The hypothesis was that these different dishwashing methods ... are not equally good in reducing bacteria from eating utensils and so on," Hesselmar says. "So we thought that perhaps hand dishwashing was less effective, so that you are exposed to more bacteria" in a way that's helpful.

Read the rest at: npr.org

Editor's Note: As usualy there is no mentioning of BPA, Endocrine mimicking chemicals and other very dangerous chemicals that are causing men to feminize and women to Masculinize. This us causing boys to develop boobs and boys penises to be deformed. We are under a chemical attack on multiple fronts and although hand washing your dishes might be one way of exposing yourself to a healthy level of bacteria and microorganisms, it's hardly the main problem in this equation. Mankind is being altered by chemicals (intentionally) and men and women in the west are suffering the most from this as we've been exposes the longest. If you care about the future of your children, you need to start investigating the detrimental effects of not only what products you use, but also what clothing you are wearing and what materials you spend a lot of time on.

Hypercleanliness may be making us sick

A growing body of evidence suggests that all the antibacterial-wiping, germ-killing cleanliness of the developed world may actually be making us more prone to getting sick — and that a little more dirt might help us stay healthier in the long run.

The idea, known as the hygiene hypothesis, was first proposed in 1989 by epidemiologist David P. Strachen, who analyzed data from 17,414 British children and found that those who had grown up with more siblings (and presumably more germs) were less likely to have allergies and eczema. Since then, the theory has been cited as a possible explanation for everything from multiple sclerosis to hay fever and autism. But its particulars aren’t so clean and clear.

Here’s what researchers do know: Our immune systems need bugs. They rely on early encounters with germs to learn how to protect our bodies.

“Bacteria, fungi, lots of these things we think of as bad — they’re all part of our environment, and we evolved to live with them,” says Michael Zasloff, an immunologist and physician at Georgetown University Medical Center. Through exposure to these microbes early in life, your immune system learns what’s harmful and what isn’t, he says, and that readies the immune responses you’ll have for the rest of your life.

“The body has got to know friend from foe,” Zasloff says. If your body learns that a specific microbe or substance — any antigen, or visitor to the body — is a foe, it will send immune system cells to destroy it. If it recognizes the antigen as a friend, the immune system will leave it alone. “Exposure tells the immune system, ‘These are the things you’re going to run into all the time, so you don’t need to worry about them.’ ”

According to the hygiene hypothesis, bad things can happen if this early exposure doesn’t take place or if it doesn’t include the right microbes. The immune system can become overly sensitive, overreacting to non-threats such as pollen or dander as if they’re potentially harmful. When combined with certain genetic traits, this process can lead to conditions such as asthma and allergies, says Kathleen Barnes, an immunogeneticist at Johns Hopkins University who specializes in the genetics of asthma.

Barnes’s work has revealed that although genes play a key role in the development of asthma, changing a population’s exposure to microbes — by protecting them from parasitic diseases, for example — can make asthma rates rise. That suggests that hygiene may also play a role in asthma.

“It can’t all be due to genes, because if we look at the prevalence of asthma or diseases of inflammation over the past 50 years, we see it’s definitely on the rise,” Barnes says. “It’s some interaction between the genes and the environment that’s causing these rates to skyrocket.”

But researchers can’t say which particular interactions with the environment help prevent disease later on. That’s because exposures tend to come in combinations, and teasing apart their effects on the body is difficult.

Take farming, for instance. Several studies have suggested that growing up on a farm can protect children from allergies and other immune-system-related conditions, but it’s hard to know which element of farm living does the trick.

A 2012 study of Amish and Swiss farm and non-farm children found that the farm-dwelling kids had significantly lower rates of asthma, hay fever and eczema. But the farm dwellers differed from their non-farm peers in several ways: They had more exposure to livestock and the microbes that come with them; they were more likely to drink raw milk, which contains microbes not found in pasteurized milk; and they tended to have more siblings at home.

Because each of these factors has been associated with reduced risk of allergies and related diseases, researchers can’t pinpoint which factor or combination of factors provides the protection.

Parasites and disease-causing microbes have also shown a protective effect, but again it’s not clear which microbes are doing the protecting. A 2007 study that compared genetically related children living in Finland and Russia found that the Russian children — who were less wealthy than their Finnish counterparts and who more frequently showed antibodies to the hepatitis A virus, H. pylori bacteria and other microbes associated with poor hygiene practices — were far less likely to have allergies. The findings made it clear that microbial infections and environmental differences were conferring an advantage, but they were less conclusive about which infections conferred the greatest advantage.

Read the rest at: washingtonpost.com