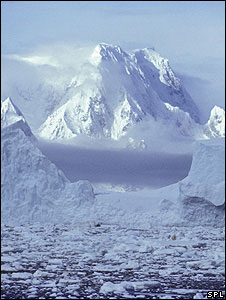 The collapse of a major polar ice sheet will not raise global sea levels as much as previous projections suggest, a team of scientists has calculated.

Writing in Science, the researchers said that the demise of the West Antarctic Ice Sheet (WAIS) would result in a sea level rise of 3.3m (10 ft).
Previous estimates had forecast a rise in the region of five to six metres.
However, they added, the rise would still pose a serious threat to major coastal cities, such as New York.

"Sea level rise is considered to be the one of the most serious consequence of climate change," lead author Jonathan Bamber told the Science podcast.

"A sea level rise of just 1.5m would displace 17 million people in Bangladesh alone," he added.

"So it is of the utmost importance to understand the potential threats to coastlines and people living in coastal areas."

Professor Bamber, from the University of Bristol's Glaciology Centre, said that the WAIS posed "potentially one of the most serious threats".
The world has three ice sheets, Greenland, East Antarctica and West Antarctica, but it is the latter that is considered most vulnerable to climatic shifts.

"It has been hypothesised for more than 30 years now that the WAIS is inherently unstable," he explained.
"This instability means that the ice sheet could potentially rapidly collapse or rapidly put a lot of ice into the oceans."

When the idea first emerged in the late 1970s, it was estimated that global sea level would rise by five metres if the WAIS collapsed.

Current projections suggest that a complete collapse of WAIS would result in an increase of up to six metres.

But Professor Bamber said that no-one had revisited the calculation, despite new data sets becoming available, and scientists developing a better understanding of the dynamics in the vast ice sheets.
The original estimates were based on "very basic ice thickness data", he explained.

"Ice thickness data gives you information about the depth of the bedrock underneath the ice sheet.
"Over the past 30 years, we have acquired much more ice thickness data over the whole of Antarctica, particularly over West Antarctica.
"We also have much better surface topography. Those two data sets are critical in determining two things."

The first was knowing the volume of ice that could contribute to sea level rise, and the second was a better understanding of the proportion of WAIS that was potentially susceptible to this instability.

Instead of assuming that the entire WAIS would collapse, causing sea level to rise by up to six metres, Professor Bamber and colleagues used models based on glaciological theory to simulate how the 2.2 million-cubic-km ice sheet would respond.

"Our reassessment of West Antarctica's contribution to sea level rise if the ice sheet was to collapse is about 3.3 metres," he said.
"That is about half of the value that has been quoted up until now." 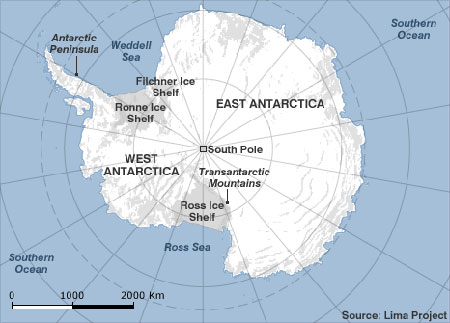 The team's study also calculated what regions were likely to experience the biggest increases in sea level.

"Sea level rise is not uniform across the world's oceans, partly as a result of disruptions to the Earth's gravity field," explained Professor Bamber.
"It turns out that the maximum increase in sea level rise is centred at a latitude of about 40 degrees along the Atlantic and Pacific seaboards of North America."

This would include cities such as San Francisco and New York.

These areas could expect increases of one-and-a-quarter times the global average, the team estimated.

In other words, if the global average was one metre, then places like New York could expect to see a rise of 1.25m.

Responding to Professor Bamber's paper in Science, British Antarctic Survey science leader Dr David Vaughan described the findings as "quite sound".
"But for me, the most crucial question is not solely about the total amount of ice in West Antarctica, because that might take several centuries to be lost to the ocean," he told BBC News.

"The crucial question is how much ice could be lost in 100-200 years; that's the sea level rise we have to understand and plan for.

"Even with this new assessment the loss of a fraction of WAIS over those timescales would have serious consequences and costs that we've only really just begun to understand."