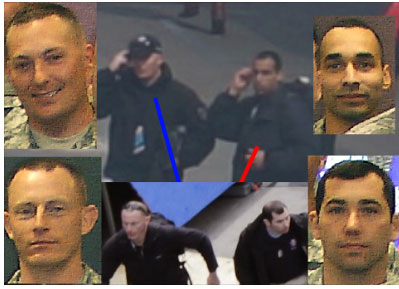 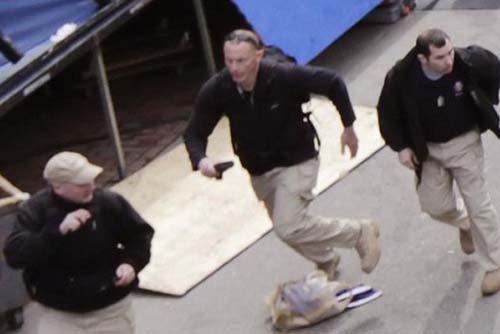 Update 3: This article confirms that the 1st, 13th, and 24th CSTs are in fact the men in black and khaki: http://communities.washingtontimes.com/neighborhood/freedom-...

Some of these men look to be the same guys spotted in the Boston Marathon photos.

Update: According to this article from the Air National Guard site: http://www.ang.af.mil/news/story.asp?id=123344967

"The Massachusetts team was on duty during the running of the Boston marathon, augmented by similar civil support teams from the New York and Rhode Island National Guards."

So it would appear that the CST team on duty during the explosion was the Massachusetts Army National Guard’s 1st Civil Support Team, augmented by New York’s 24th CST and Rhode Island’s 13th CST.

"A Weapons of Mass Destruction Civil Support Team (WMD-CST or CST) advises civilian responders in the event of a suspected weapon of mass destruction attack. CSTs are federally funded National Guard units established under Presidential Decision Directive 39. There are 57 fulltime teams: one in every U.S. state, Washington, D.C., Puerto Rico, Guam and the US Virgin Islands, and an additional team each in California, Florida and New York."

Here are more photos of them: http://imgur.com/a/YrTOK

Here is a photo of some of them wearing vests identifying them as CST: http://www.guardian.co.uk/world/gallery/2013/apr/15/boston-m...

The vehicles they are using are identical to those used by other Army National Guard CSTs as well, as can be seen here: http://www.oregon.gov/OMD/pressrelease/2010/feb/2-22/100222-...

Here is picture of one of the vehicles as seen in this .PDF about CST operations (http://armypubs.army.mil/doctrine/DR_pubs/dr_a/pdf/fm3_11x22...): http://willyloman.files.wordpress.com/2013/04/advon-team.jpg

As to why one of them were seen wearing Craft apparel, Craft International provides training programs to police and military, and it is likely that the whole team received training from Craft and received the apparel from them, or maybe just the individual did, or maybe it’s even simpler than that, perhaps the man wearing the hat simply likes the hat and purchased it from Craft.

Their presence does lend credence to the idea that authorities may have had prior intelligence of a possible bombing, or were in fact holding a drill that day.

Read the full article at: dailypaul.com