In Sweden, a debate over whether gender equality has gone too far 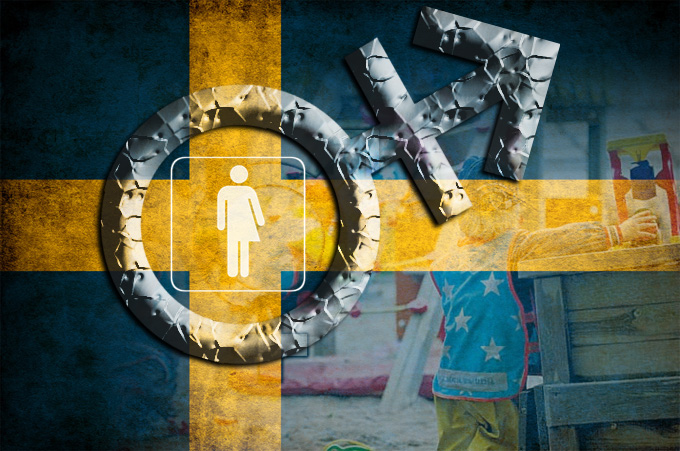 As gender-neutral policies are promoted more broadly in Sweden’s schools – including the use of a neutral pronoun to refer to boys and girls – some Swedes are pushing back.

Sweden has a longstanding reputation as an egalitarian country with a narrow gender gap. But a national debate about gender equality – particularly as it plays out in schools – has revealed substantial dissatisfaction, with some Swedes feeling it has gone too far.

Rousing controversy now is the issue of gender pedagogy, a concept that emerged in the early 2000s and typically involves challenging gender stereotypes in learning material and in avoiding treating male and female pupils in a stereotypical manner. Proponents believe such a perspective should infuse day-to-day work at schools rather than be taught as a separate subject. But what has sharpened the debate in Sweden has been the argument that schools should also be gender neutral, giving children the opportunity to define themselves as neither male nor female if they wish.

In 2008, the Swedish Department of Education appointed the Delegation for Equality in Schools, which made the issue of gender equality central to the Swedish education system. The government spent 110 million Swedish crowns ($16.3 million) on promoting equality in schools along the lines of school laws that stipulate that teachers must actively counteract gender stereotypes and promote equality.

Yet when the Green Party recently proposed placing gender pedagogues at every preschool in Stockholm, the capital, they were accused of promoting an extremist feminist agenda and told they were not reflecting parents’ interests. And when it emerged that some preschools have banished references to children’s genders, it sparked a national furor, revealing that while most Swedes support gender equality, not all are on board with the idea of gender-neutral child-rearing.

Are gender studies an ’elite’ concept?

Kristina Henkel, a gender expert specializing in equality in schools, disputes the argument that gender pedagogy and neutrality are being foisted on Swedes. "Sweden has a long tradition of working with equality and this has had strong support among politicians," she says, and adds that "the question of gender neutrality, or of everyone having equal rights despite their gender, has also been driven by activists at the grassroots level."

But Elise Claeson, a columnist and a former equality expert at the Swedish Confederation of Professions, disagrees. "I have long participated in debates with gender pedagogues and they act like an elite," she says. "They tend to be well-educated, live in big cities, and have contacts in the media, and they clearly despise traditional people – that is, the ... heterosexuals living in nuclear families."

Ms. Claeson has been a vocal critic of the word "hen," a new, gender-neutral pronoun that was recently included in the online version of the National Encyclopedia. Around the same time, Sweden’s first gender-neutral children’s book was published. The author, Jesper Lundqvist, uses hen throughout his book, completely avoiding han and hon, the Swedish words for him and her.

Claeson believes that the word hen can be harmful to young children because, she says, it can be confusing for them to receive contradicting messages about their genders in school, at home, and in society at large. "It is important to have your gender confirmed to you as a child. This does not limit children; it makes them confident about their identity…. Children ought to be allowed to mature slowly and naturally. As adults we can choose to expand and change our gender identities."

But many proponents of gender neutrality believe that freeing children from expectations tied to gender roles, at least in school, gives them more choices. "Children ought to be allowed to be children, but we should not cement them in roles that we carry with us from the past," says Lotta Rajalin, director of Egalia, a Stockholm preschool which opened in 2010.

Egalia received widespread attention for banishing gendered pronouns and applying for Lesbian, Gay, Bisexual, and Transexual (LGBT) certification from the Swedish Federation for LGBT Rights. At Egalia, everything from the books the children read to the toys they play with has been carefully selected to avoid stereotypical depictions of gender and relationships. When Egalia students, who are between one and six years old, play house, they are as likely to act out the roles of "mommy, daddy, child" as "daddy, daddy, adopted child." A key policy at the school is to avoid words like boy and girl. Instead, teachers address the children by their first names or as friends.

Egalia has both been hailed as a milestone in the fight for equality and slammed as a cult-like institution that is brainwashing children and promoting a radical feminist agenda.

Society catching up with the state

Though it may sound eccentric, Egalia’s approach is not really a fringe one. Ms. Rajalin, who is also a director of six other preschools, says that she is only following directives set out by the government. The Swedish national curriculum for preschools, published in 1998, states: "Preschools should counteract traditional gender patterns and gender roles. In preschools, girls and boys should have the same opportunities to test and develop abilities and interests without being limited by stereotypical gender roles."

Ingrid Lindskog of the Swedish National Agency for Education says that striving for equality should be integral to schooling. "Equality issues should be weaved into the lessons. It should inform how teachers plan their classes, put together groups, and how they react to pupils treating each other badly – if a boy oppresses a girl, for instance, or the other way around," she says. And it is not just preschools who are obliged to integrate gender awareness into their pedagogy. "All Swedish schools have a responsibility to counteract traditional gender patterns," says Ms. Lindskog.

Last fall, nearly 200 teachers gathered in Stockholm to discuss how to avoid "traditional gender patterns" in schools. The conference was part of a research project run by the National Agency for Education and supported by the Delegation for Equality in Schools. This approach is now being emulated abroad.

"I work with these issues in Finland and Norway and it is clear to me that they have been inspired by the Swedish preschool – and school curricula," says Ms. Henkel, the gender expert. "In the United States, something called anti-oppressive pedagogy, which aims for inclusiveness, has been practiced since the 1980s. So these kinds of ideas exist in many countries, but here the state has worked hard to promote Sweden as a role model nation."

But Henkel also insists that gender equality is a rights issue that cannot simply be left to the state to handle. Instead, she says, it requires the active involvement of citizens. "Rights are not something we receive and then don’t have to fight for. This is about a redistribution of power, and for that initiative and action are needed, not just fancy legislation."

Assange: “Sweden is The Saudi Arabia of Feminism”

Swedish military lion gets the snip after women troops protest

Audio Commentary
The Nordic Model, a Template for Global Enslavement