The film maker approaches a woman holding a Mexican flag and asks her what would happen if an American attempted to fly a U.S. flag at a protest in Mexico.

“What would happen to them?” he asks the woman.

“Some crazy sh*t,” she responds.

The footage then cuts to an angry white woman who attempts to block the film maker from recording the woman with the Mexican flag.

The woman quickly becomes irate and offended on behalf of the Mexican woman, pointing a camera in the man’s face and demanding to know his address.

“I wish somebody could come save me from you right now,” jokes the man.

“Right, well nobody has to save you because you’re a f**king white man who gets to do what he wants to in this space, so I’m saying no, you do not have permission to walk around videotaping women of color,” the woman barks.

Apparently, she thinks that permission is required to film people who are taking part in a protest in a public area.

Again, the individual is seemingly unaware that Americans, no matter their gender, skin color or political beliefs, have a right to peaceably assemble on public property.

The exchange highlights three traits that are prevalent amongst social justice warriors;

1) They don’t believe in equality.

The film maker’s free speech is immediately disqualified and the woman attempts to no platform him because he doesn’t agree with her politically and is a white man.

2) They don’t believe in free speech.

The woman tries to impose her own authoritarian code of conduct on the man in order to silence his First Amendment rights.

The white woman rushes to the aid of the Mexican woman, presuming that she is unable to defend her political ideas on her own because she is a minority. This is the bigotry of low expectations. 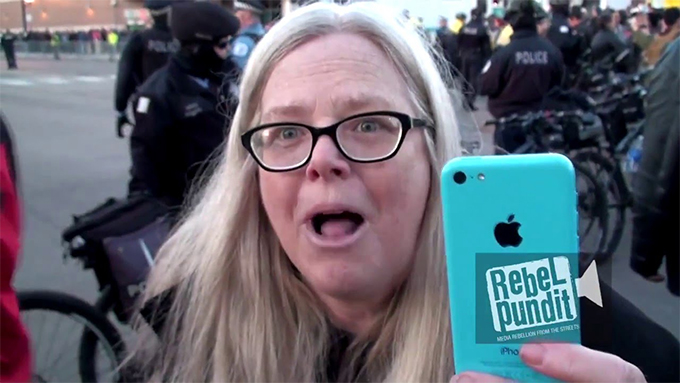