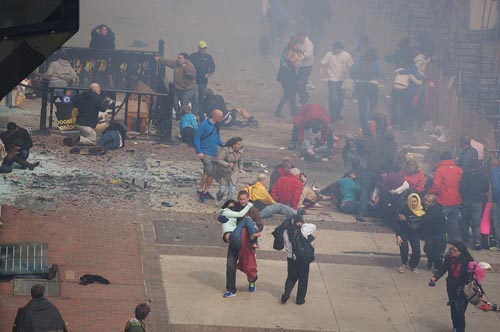 The investigation into Monday’s deadly bombing at the Boston Marathon has officially gone international: law enforcement officials from Israel have been sent to the United States to assist in the probe.

Israel Police Chief Yohanan Danino says he has dispatched officials to Boston, Massachusetts, where they will meet with Federal Bureau of Investigation agents and other authorities, the Times of Israel Reports.

Citing an earlier report published by the newspaper Maariv, Times of Israel writes that Danino has dispatched police officers to participate in discussions that “will center on the Boston Marathon bombings and deepening professional cooperation between the law enforcement agencies of both countries.”

The paper reports that Israeli law enforcement planned the trip before the deadly pair of bombings on Monday that has so far claimed three lives, but the discussions will now shift focus in order to see how help from abroad can expand the investigation.

In an address made Tuesday, Israel President Shimon Peres said that tragedies such as this week’s incident in Boston, sadly, bring people together from across the world.

“When it comes to events like this, all of us are one family. We feel a part of the people who paid such a high price. God bless them,” Peres said. “Today the real problem is terror, and terror is not an extension of policy: Their policy is terror, their policy is to threaten. Terrorists divide people, they kill innocent people.”

Around 20 hours after two bombs detonated near the finish line of the annual race, United States President Barack Obama went on record to condemn the tragedy as a terrorist attack.

“This was a heinous and cowardly act,” said Obama from the White House, “and given what we now know the FBI is investigating it as an act of terrorism.”

But even as officials come to assist from as far away as Israel, authorities are still in the dark as far as finding any leads in the case. Pres. Obama has directed the FBI and US Department of Homeland Security to assist in the investigation, but no agencies have identified suspects or motives at this time.

Pres. Obama has also said that his administration has been directed to implement “appropriate security measures to protect the American people,” but details as to what that could mean remain scarce. Meanwhile, at least one leading lawmaker is asking for the US to respond to the terrorist attack by increasing the scope of the ever-expanding surveillance program already growing across the United States.

“I do think we need more cameras,” Rep. Peter King (R-New York) told MSNBC after Monday’s attacks. “We have to stay ahead of the terrorists and I do know in New York, the Manhattan Security Initiative, which is based on cameras, the outstanding work that results from that. So yes, I do favor more cameras. They’re a great law enforcement device. And again, it keeps us ahead of the terrorists, who are constantly trying to kill us.”

New York Mayor Michael Bloomberg has also confirmed that he has dispatched law enforcement officers from the Big Apple to assist in the investigation by meeting with agents at a Boston fusion center, one of the DHS-funded data facilities that collects surveillance camera footage and other evidence in order to analyze events like Monday’s attack.

“We are certainly engaged in the information flow with the FBI through our Joint Terrorism Task Force. We have two New York City police officers, police sergeants, who are in the Boston Regional Intelligence Center,” Bloomberg said on Tuesday. “They’re up there, they’ve been up there since last evening.”

But in a study conducted last year by the Senate’s bipartisan Permanent Subcommittee on Investigations, lawmakers found that those fusion centers have been more or less unhelpful in assisting with terrorism probes.

The Department of Homeland Security’s work with state and local fusion centers, the subcommittee wrote, “has not produced useful intelligence to support federal counterterrorism efforts.” Instead, they added, so-called “intelligence” shared between facilities consisted of tidbits of shoddy quality that was often outdated and “sometimes endangering [to] citizen‘s civil liberties and Privacy Act protections.”

“More often than not,” the panel added, information collected and shared at DHS fusion centers was “unrelated to terrorism.”

THIS ONE IS TOO BIZARRE: THE MARATHON BOMBING AND ISRAELI POLICE
By Joseph P. Farrell | Giza Death Star

This one is so bizarre any way one approaches it, that it’s not even funny. Indeed, I don’t even know where to begin. That something is rotten in the Commonwealth of Massachusetts concerning the Boston marathon bombing seems evident to most thinking people, listening to the media report now this, now that “fact”. We have been witness to the almost pathological glee of certain talk show hosts, itching to blame it on the “radical right” (meaning all the “gun-toatin’ Republicans and militia people and yellow-dog Democrats in the “red” states”), two poison letters, one to a senator, another to the president, may make it possible for the story to evolve along whatever the most convenient path the “story” (still in progress) needs to take.

Well, we can fairly guess the direction “they” want it to take if we turn to this story (again, coming from RT):

First off, after all the security cameras, patriot acts, Heimatsicherheitsdienst, TSA, electronic eavesdropping and all the other wonderful “security” we’re getting for the increasingly high taxes our misrepresentative bilk from us, how did this even happen? Secondly, why hasn’t senator Feinstein spackled on some make-up and demanded Federal background checks on people buying pressure cookers, nails, ball bearings, bb’s, and so on? I mean, if we’re to be logically consistent…oh yea, I forgot, it’s not about the constitution, it’s about using opportunity for increasing your power. Sorry Diane, now I understand.

But now, thirdly, after all the money we lavish on the alphabet soup agencies – CIA, NSA, FBI, DIA, ONI and all the others – how and why in the same of sense do we need help from anyone.

And fourthly, if we call on people to “help” us if we suspect this is terrorism, why not the Russians? (They have some experience with it as I recall). Oops. I forgot. You cannot trust the Ruskies. Well, why not the British? They have bomb experts and bomb-sniffing dogs too. But, well, you know the British, they take any such opportunity to spy on everyone else. Besides, we spy on everyone else so much better. Well, the Germans then? they have bomb experts and dogs too… but they probably wouldn’t come even if we did invite them, which we won’t, because then they’ll say “Sure. Give us our gold first.”

So why of all people Israel?

Read the full article at: gizadeathstar.com