It Begins! (in the USA) Montana Man Being Prosecuted for 'Hate Speech' and Holocaust Denial 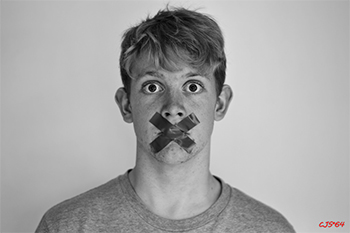 Via Volokh Conspiracy, a disturbing criminal case out of Montana, where Flathead County resident David Lenio, 28, is being prosecuted for making disparaging remarks about Jews on Twitter and denying that the Holocaust happened.

Say what? While this sort of prosecution is common in parts of Europe, Americans enjoy the protection of the First Amendment, which contains no exception for what's colloquially known as "hate speech." The only permitted exceptions to free speech protections - as the Supreme Court recently re-articulated - are for obscenity, defamation, fraud, incitement, and "speech integral to criminal conduct."

As Eugene Volokh explains, defamation law is generally "limited to false factual assertions. It requires a showing that the speaker knows the statement is false, and isn’t just mistaken (reasonably or not). And it requires a statement about a particular person."

But under Montana's ridiculously broad defamation statute, "defamatory matter is anything that exposes a person or a group, class, or association to hatred, contempt, ridicule, degradation, or disgrace in society or injury to the person’s or its business or occupation." And anyone who "communicates any defamatory matter to a third person without the consent of the person defamed commits the offense of criminal defamation."

Here's a sample of the kind of things Lenio has been arrested for tweeting:

I hope someone goes on a massive killing spree in kalispell school because I'm so poor I can't afford housing and don't care about your kids.

Now that the holocaust has been proven to be a lie beyond a reasonable doubt, it is now time to hunt the Nazi hunters.

#Copenhagen It’s important to note that jews hate free speech & are known bullsh-ters, could be #falseFlag

Reasonable people may disagree on whether Lenio's assertion that he's going to shoot people constitutes a "true threat." (U.S. courts have recently been grappling with something similar in a case involving Facebook statements, although in that case the potential threats were directed at specific individuals.) But it's clear that if any illegal speech is at play here, it's the suggestion that Lenio might commit violence, right?

The Flathead County prosecutor's office, however, is charging Lenio not just for "intimidation" but also, independently, under the state's defamation statute. It argues that Lenio made defamatory statements about Jews by suggesting that they have degraded the economy and dislike free speech and by stating that the Holocaust was a lie.

Lenio's lawyer filed a motion to dismiss the charges on grounds that the statutes were unconstitutionally overbroad.* The state argued in response that "Lenio does not establish beyond a reasonable doubt that (the defamation law) is facially overbroad because it is not limited to cases against individuals or small groups of people" and he "does not establish how the statute reaches protected speech in a substantial number of cases."

Can we pause a second there? According to Montana proseutors, it's unimaginable how a law against voicing any negative opinion about any group of people could infringe on free speech in a substantial way.

This is not defamation as it's commonly understood. This is, as Volokh states, "that extraordinarily rare thing: an American prosecution for "hate speech." There's just one tiny problem: "The First Amendment doesn’t allow that."

Read the rest at reason.com